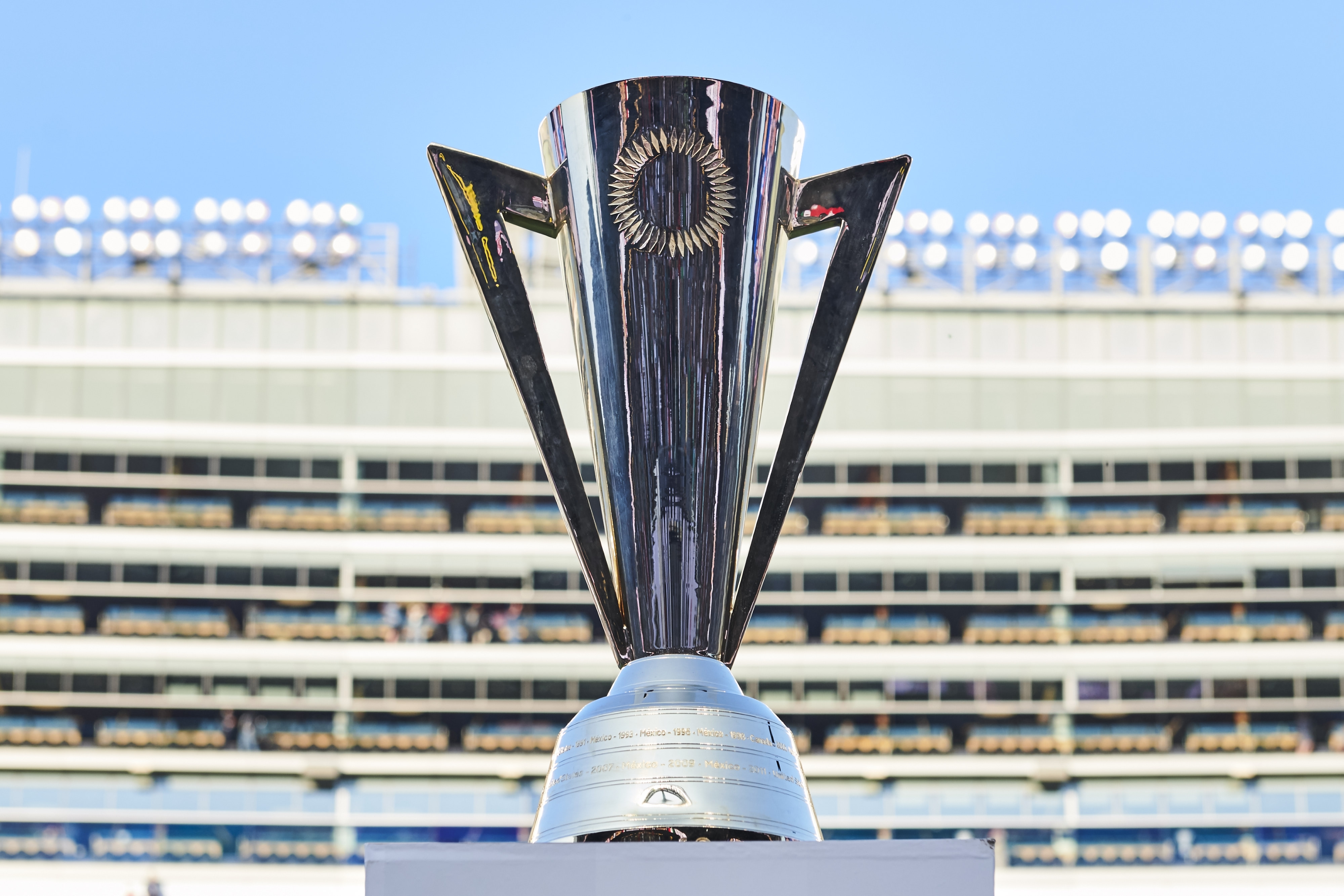 Miami, FL (Thursday, April 22, 2021) – Concacaf has announced the nine stadiums in six US metropolitan areas that will host group, quarterfinal and semifinal matches in the 2021 Concacaf Gold Cup. The 16th edition of Concacaf’s flagship men's international competition will crown the best men's national team in the region.

This announcement comes after Allegiant Stadium (Las Vegas, NV) and DRV PNK Stadium (Fort Lauderdale, FL) were confirmed as the host venues for the Final (August 1) and the Prelims (July 2-6), respectively.  The 2021 Concacaf Gold Cup is a key part of the Confederation’s 60th anniversary celebration and a vibrant summer of football, which will also include the Concacaf Nations League Finals in June.

“The announcement of these outstanding venues moves us a step closer to what is sure to be a great Gold Cup this summer,” said Concacaf President and FIFA Vice President Victor Montagliani. “It is fitting that in our 60th anniversary year we will use a number of stadiums with a rich history of hosting Concacaf football, while also making history with new venues that will host Gold Cup matches for the very first time.”

“I am also extremely pleased that we have enhanced the Gold Cup format so that all the final group stage games will be played simultaneously. This will add to the competitive intensity of the tournament and provide an even more compelling spectacle for fans. Alongside the introduction of a first ever Gold Cup Prelims and a new format in the knockout stage this is another example of our football first approach at Concacaf,” added Montagliani.

The nine stadiums that will host group and knockout stage matches of this year’s edition of the Concacaf Gold Cup are, in alphabetical order by stadium name (previously hosted Gold Cups):
These nine stadiums join the previously announced Allegiant Stadium (Final) and DRV PNK Stadium (Prelims) as the 11 venues that will host 2021 Concacaf Gold Cup matches. To officially kick off the 2021 Gold Cup, 12 nations who qualified through their Concacaf Nations League performances will compete for the final three spots in the 16 team Gold Cup Group Stage via the Prelims. The Round One and Two Prelims matchups were drawn on September 10, 2020, and are available here. 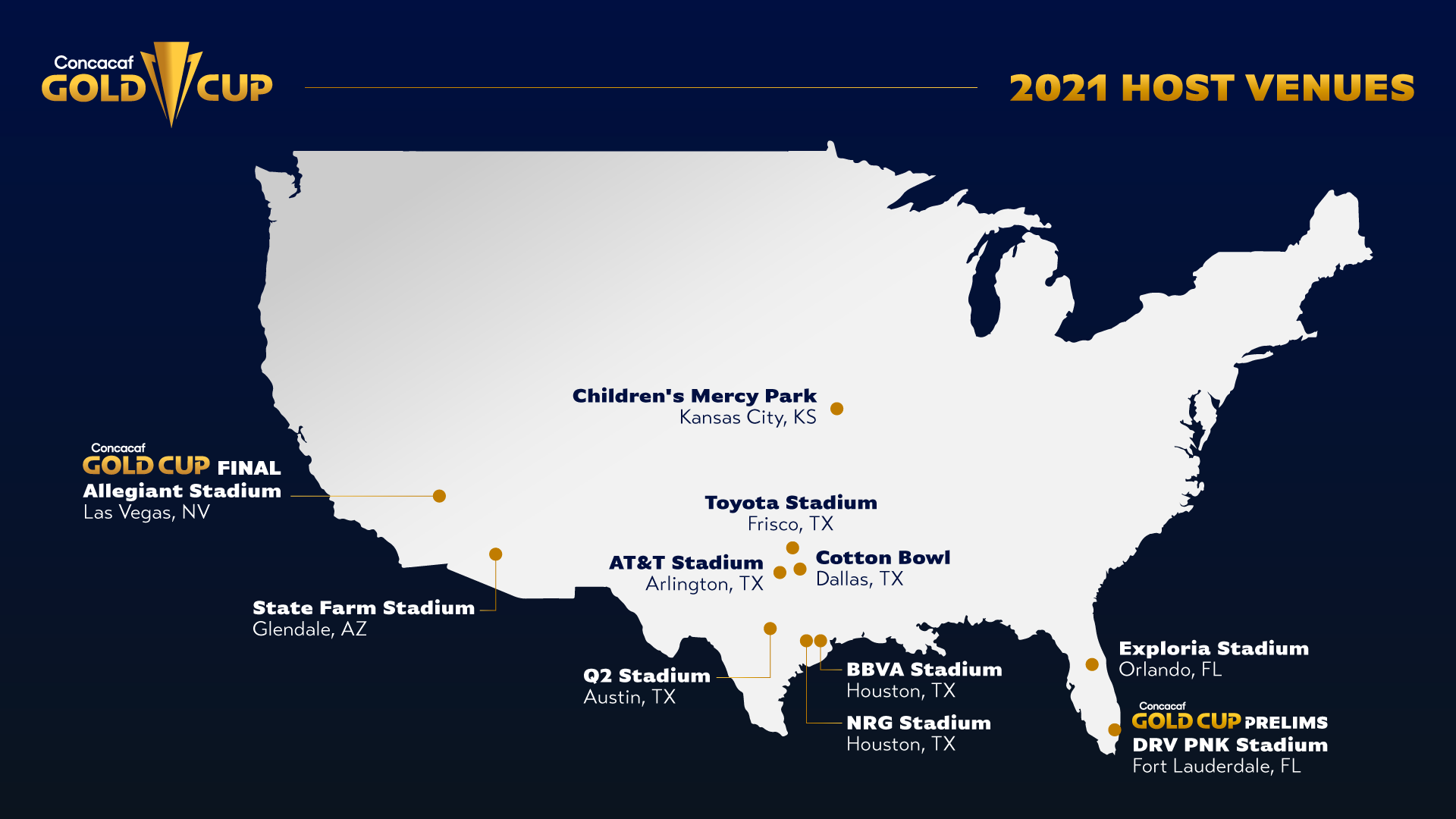 The group stage featuring 16 national teams will begin on July 10 and will be played in a hub-city format, reducing team travel to prioritize the safety of all involved. The groups for the 2021 Concacaf Gold Cup were also drawn on September 10, 2020, and are as follows:
Group A: Mexico, El Salvador, Curacao and Winner Prelims 9
Group B: USA, Canada, Martinique and Winner Prelims 7
Group C: Costa Rica, Jamaica, Suriname and Winner Prelims 8
Group D: Honduras, Panama, Grenada and Qatar.

In a significant development to the format, for the first time all the Gold Cup’s final group stage matches will be played simultaneously. This is to ensure an even more compelling spectacle as the teams each compete to reach the knockout stage.

At the end of Group Stage play, the top two finishers in each group will advance to a knockout stage, which for the first time in Gold Cup history see teams on opposite sides of the bracket meet from the quarterfinals onwards. The knockout stage will be played as follows:

Concacaf will announce the schedule, ticketing information, and other details in the coming weeks.

To receive information about the 2021 Concacaf Gold Cup, including scheduling, kick off times, and other details, sign up here.

Click here for the tournament bracket and here for additional assets including tournament logos, stadium imagery, and more.

Matches will be widely available for fans across the region and the world to follow and enjoy through the Confederation’s partner networks, including Fox Sports (USA-English), Univision (USA-Spanish), OneSoccer (Canada-English), Televisa (Mexico-Spanish), Futbol de Primera (USA-Spanish Radio) and other local partners in the Caribbean, Central America and the world.

Enhancements to the 2021 Concacaf Gold Cup
For the 2021 Gold Cup, Concacaf introduced a series of football first enhancements to add more anticipation for fans and increase competition between the teams. This included a first-ever Gold Cup draw, which took place in September 2020, the introduction of a Prelims to qualify the final three teams into the group stage and a new format in the knockout stage which means teams on opposite sides of the bracket will meet from the quarterfinals onwards. The 2021 Gold Cup will also include the AFC Champion, Qatar, as a guest participant and it will be the first Gold Cup to use Video Assistant Referees (VAR).