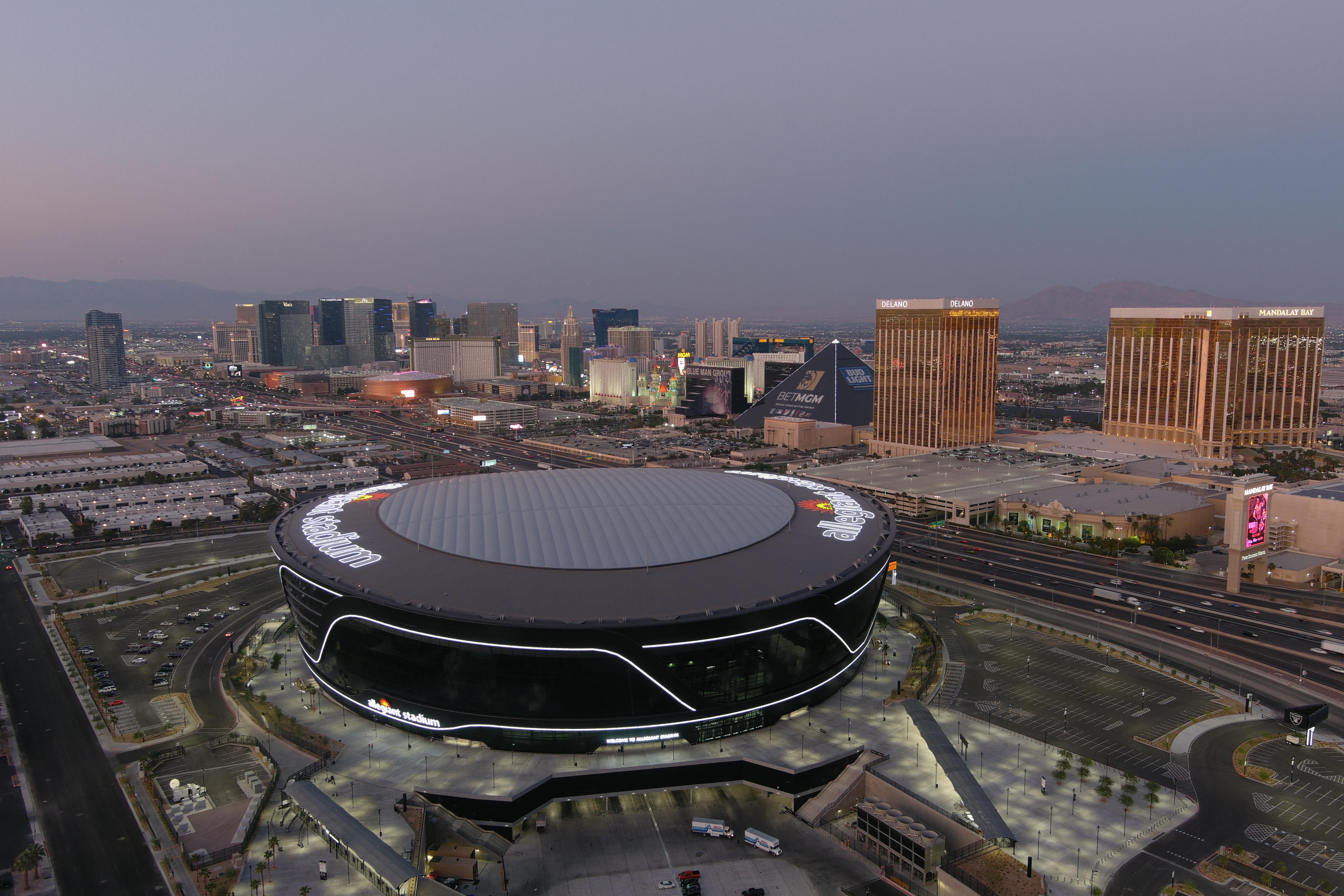 Concacaf has announced that the Final of the 2021 Concacaf Gold Cup – the 16th edition of the region’s flagship men’s international competition, has been awarded to Las Vegas and Allegiant Stadium, the destination’s newest state-of-the-art sports venue.

The championship match on August 1 will crown the best men’s national team in the Concacaf region. This will be the first time a Gold Cup match is played in Las Vegas in the event’s 30-year history, making the 2021 tournament a landmark edition. The final will cap off a great summer of football that will also include the inaugural Concacaf Nations League Finals in June, and the Gold Cup Prelims in early July.

“At Concacaf we are very excited about this summer’s Gold Cup and we know that Las Vegas and Allegiant Stadium will provide a great host city and venue for the final,” said Concacaf President and FIFA Vice President Victor Montagliani. “2021 is Concacaf’s 60th anniversary year making this edition extra special for players and fans. The federations and their teams are looking forward to this tournament with great anticipation and it is fitting that the regional champion will be crowned in such an outstanding venue and famous city,” added Montagliani.

“The Raiders are proud to join Las Vegas in hosting the Final of the 2021 Concacaf Gold Cup at Allegiant Stadium in August,” said Raiders President Marc Badain. “The Gold Cup stands out among the many world-class events that will be hosted at Allegiant Stadium, and we are excited to bring Concacaf’s signature event to the Sports and Entertainment Capital of the World.”

“We’re thrilled that the 2021 Concacaf Gold Cup is coming to the Sports Capital of the World,” said Steve Hill, CEO/President of the Las Vegas Convention and Visitors Authority. “We’re delighted to have the opportunity to host an event of this caliber, and with world-class entertainment, dining, outdoor adventure and sports facilities, we’re confident the teams and their fans will find an unforgettable, Only Vegas experience.”

The 2021 Gold Cup FINAL is coming to Las Vegas!

The 2021 Concacaf Gold Cup will officially kick off with a new Preliminary Round (Prelims) at DRV PNK Stadium, home of Major League Soccer’s Inter Miami CF, between July 2-6, 2021. In the Prelims, 12 nations who qualified through their Concacaf Nations League performances will compete for the final three spots in the 16 team Gold Cup Group Stage.

The Round One and Two Prelims matchups were drawn on September 10, 2020 and are available here.

At the end of Group Stage play, the top two finishers in each group will advance to a knockout stage, which for the first time in Gold Cup history see teams on opposite sides of the bracket meet from the quarterfinals onwards. The knockout stage will be played as follows:

Additional details regarding the Final, including ticket sales information, will be announced in the coming weeks.

Concacaf will in due course provide information regarding any local and federal COVID-19 protocols which will need to be observed by attending fans. 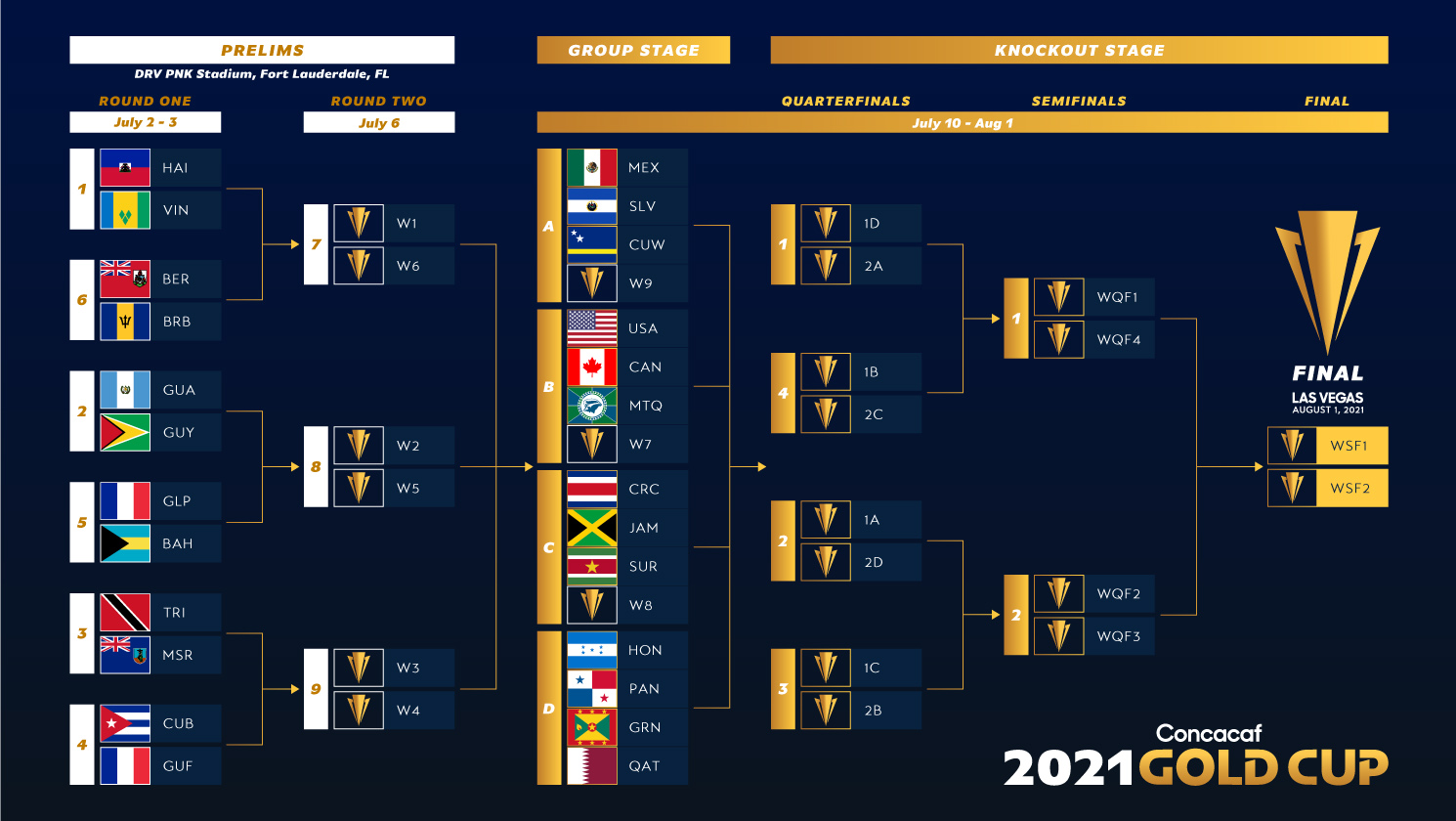 Click here for the tournament bracket and here for additional assets including tournament logos, stadium imagery, and more.