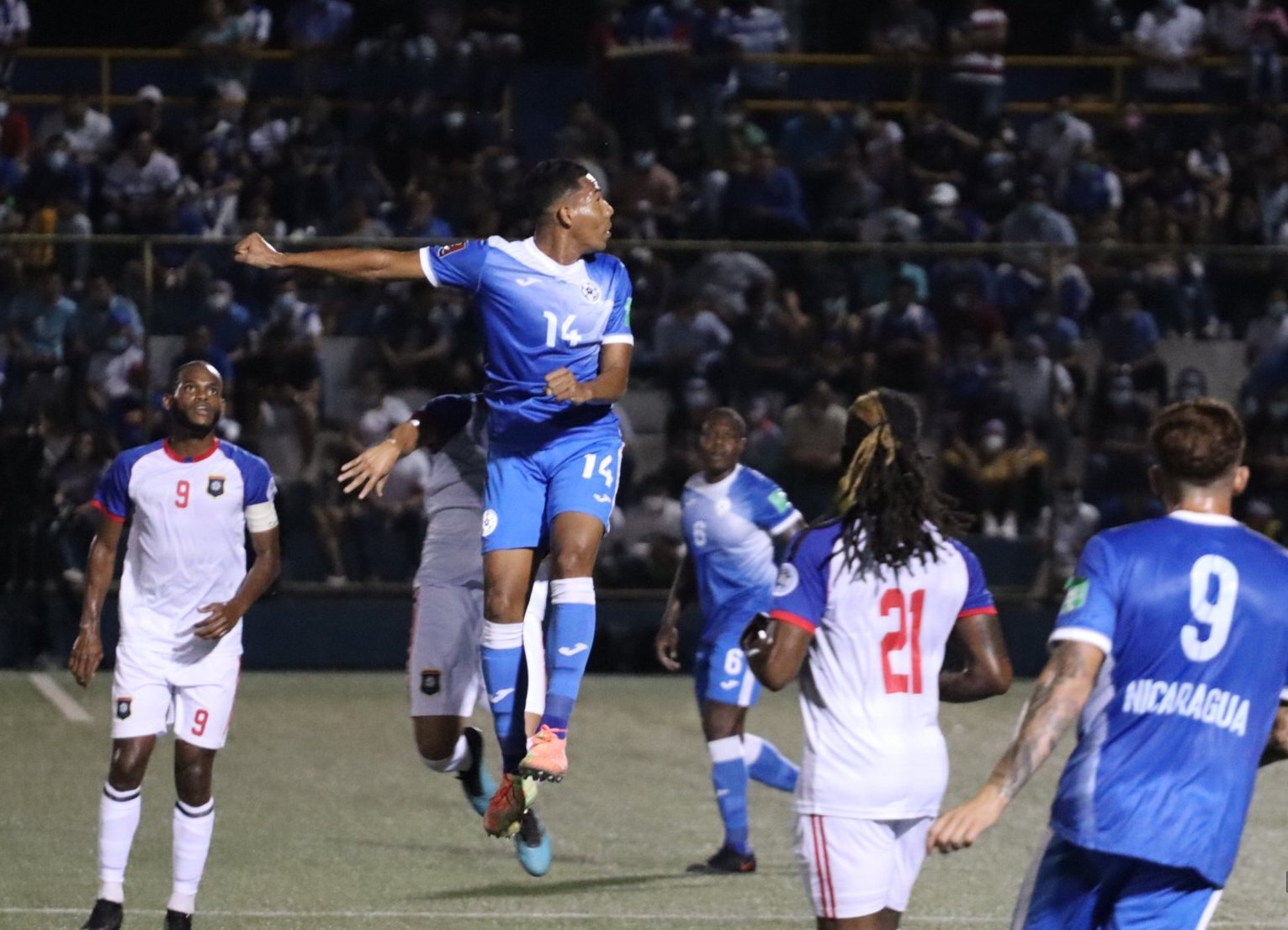 Nicaragua closed the night out in Group E by continuing its strong start to World Cup qualification with a 3-0 win over Belize. (Photo courtesy of Fenifut)

Saint Kitts and Nevis will control its own destiny in Tuesday’s final match in Group F against Trinidad and Tobago after a 3-0 victory over Guyana on Friday at Warner Park in Basseterre. Keithroy Freeman had a first half double, converting a penalty in the ninth minute and getting his second in the 36th minute. SKN took a throw-in on the near side and a cross was sent in from the first touch. Freeman poked out his foot for a deflection into the net and the second of the game.

Romaine Sawyers added the third for Saint Kitts and Nevis with a goal in the 67th minute. Omari Sterling-James had the ball at his feet in the box and rather than going for goal, he found an open Sawyers at the top of the box. The West Bromwich Albion forward took a touch and then fired into the back of the net.

Antigua and Barbuda topped Grenada, 1-0, to stay in the hunt in Group A. A ball over the top found veteran forward Peter Byers, but the scoring chance appeared to have dissipated when Byers played back to a fellow member of the Benna Boys. One more pass found Rhys Browne, who measured his shot and tucked it into the far post of Grenada goalkeeper Reice Charles-Cook. Grenada pushed forward looking for the equalizer and had several chances in the dying moments of the second half, but couldn’t find the goal.

Suriname stayed perfect in qualification in Group B with a 6-0 win over Bermuda. First-half doubles from debutant Sheraldo Becker and Nigel Hasselbaink paced Dean Gorre’s side early, while the second half saw Hasselbaink complete his hat trick for the second consecutive qualifier, in addition to defender Shaquille Pinas putting his name on the scoresheet.

Guatemala also capitalized on a hot start, beating Saint Vincent and the Grenadines, 10-0 in Group C. Darwin Lom headed in the opener in the second minute, followed by Rudy Barrientos scoring on a breakaway in the 12th minute. Oscar Santis added the third four minutes later after being freed by a big switch in play. Goals from Moises Hernandez and Gerardo Gordillo then sent Los Chapines into the break with a 5-0 advantage. They matched the total in the second half, ending the night with 10 different scorers.

In Group D, Barbados seemed destined for victory at the Dominican Republic, holding a 1-0 advantage thanks to a 42nd-minute goal from Niall Reid-Stephen, but the home side secured a stalemate with a Manny Rodriguez goal three minutes into stoppage time. Rodriguez swung his right leg to connect with a bouncing ball and secure the point. The Dominican Republic next meets Panama.

Nicaragua closed the night out in Group E by continuing its strong start to World Cup qualification with a 3-0 win over Belize. Richard Rodriguez found the back of the net with Bryan Bonilla starting the second half strong with a tally in the first minute after the re-start. Captain Juan Barrera capped the night with a goal of his own in the 51st minute with the Azul y Blanco preserving its perfect record ahead of the final day of qualifying.