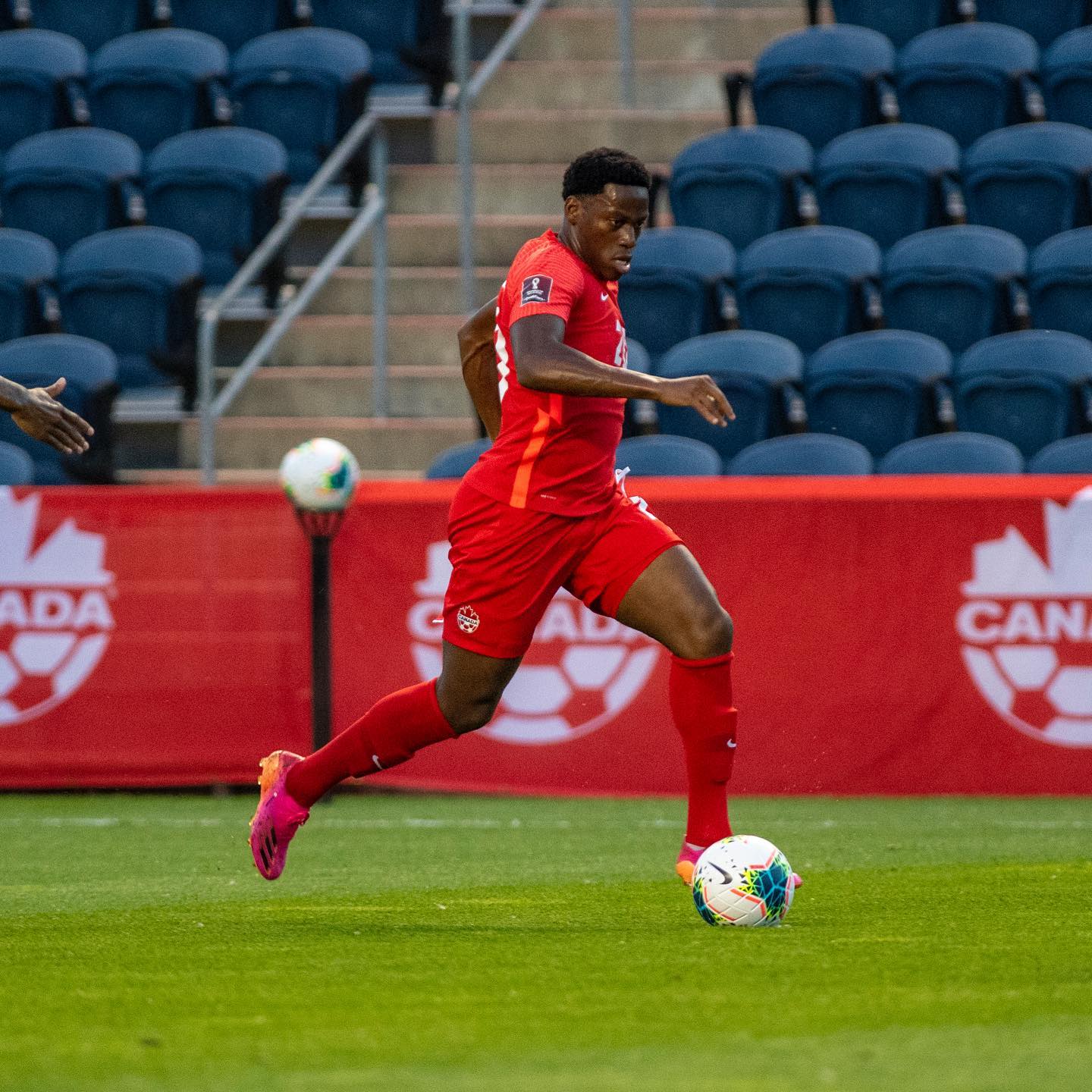 Jonathan David keyed Canada’s big win against Suriname, with a hat trick and an assist in a 4-0 triumph. (Photo courtesy of Canada Soccer)

MIAMI, Florida – The first round of Concacaf World Cup qualification drew to a close Tuesday with clarity on which teams are moving into the second round and whose hopes of making the 2022 World Cup have come to an end.

Haiti booked its spot in the second round thanks to a hard-fought 1-0 victory against Nicaragua. After a Nicaragua corner kick shortly after the hour mark, Haiti sprung a counter-attack that was finished off by Derrick Etienne Jr. As rain at the State Sylvio Cantor fell more and more heavily, the chances were tough to come by, and the one goal was enough to win it.

Trinidad and Tobago closed its campaign out with a 2-0 triumph over Saint Kitts and Nevis, which already was qualified for the second round. Duane Muckette scored in the 36th minute and Khaleem Hyland finished in the 74th minute. Saint Kitts and Nevis moves on to face the winner of Group A.

Group A was taken by El Salvador, which topped Antigua and Barbuda 3-0 on Tuesday. Eriq Zavaleta, in his second match with La Selecta, scored his first goal, nodding in for the 40th-minute goal to break the deadlock.

After Alexander Larin’s stunning spring from midfield to save a ball off the line and keep things at 1-0 in the second half, David Rugamas took it upon himself to extend the lead on a counter-attack. It was three in the 86th minute, as Walmer Martinez stepped into the box and shot from point-blank range to put the cherry on top of the win.

Curacao also made it into the second round by virtue of a scoreless draw with Guatemala. The Central American squad had opportunities, with Oscar Santis’ volley from distance the best chance of the first half, but Curacao goalkeeper Eloy Room was up to the task.

Juninho Bacuna drew Guatemala shot-stopper Nicholas Hagen into action midway through the second half, but Hagen denied him and sparked a counter-attack for Guatemala with Room again winning a battle with Santis. With points and goal difference level, a superior number of goals scored puts Curacao through to face the winner of Group D.

That turned out to be Panama, which saw off the Dominican Republic by a 3-0 scoreline. The Central Americans got a rocket of a goal from Anibal Godoy, who surged forward from the midfield to put his boot through a clearance and score from distance in the eighth minute.

In the 67th minute, Edgar Barcenas received the ball at close range and beat the Dominican goalkeeper a second time to extend the lead. Panama’s press paid dividends in the 86th minute, with the attacking line winning the ball back at the top of the 18 and Cecilio Waterman finding the third goal of the night.

Jonathan David keyed Canada’s big win against Suriname, with a hat trick and an assist in a 4-0 triumph. David played in Alphonso Davies for the opening goal in the 37th minute and found goals of his own in the 59th, 73rd and 77th minutes, the last of which came from the spot. Canada finishes the first round of qualification perfect and now moves on to face Haiti.

Montserrat topped Grenada but fell short of contending for the Group A crown. Needing a big win and a draw between El Salvador and Antigua and Barbuda, Montserrat instead registered a 2-1 win over Grenada thanks to goals from Lyle Taylor in the 85th and 87th minute, enough to overcome a lead Saydrel Lewis gave to the hosts in the 57th minute.

The day’s action got underway with a few matches between teams whose campaigns end at this stage.

Cuba closed with consecutive victories, with Dairon Reyes setting up Meykel Reyes to head in his second goal in as many matches as Cuba topped Saint Vincent and the Grenadines, 1-0.

Puerto Rico also put up a second consecutive win, beating Guyana, 2-0. Wilfredo Rivera turned in the box and got a shot off in the 12th minute, with Ricardo Rivera there to knock home the rebound for the opener. Isaac Angking converted from the penalty spot in the 25th minute to double the advantage.

Later in the night, Niall Reid-Stephen came on as a substitute for Barbados and scored his second goal in as many matches, but Dominica went level thanks to Julian Wade’s goal in the 57th minute.

Bermuda and the Cayman Islands played out a 1-1 draw. The Cayman Islands nearly had their first win of the campaign, but Kole Hall’s 65th minute goal for Bermuda brought things level after Mark Ebanks 23rd-minute opener.