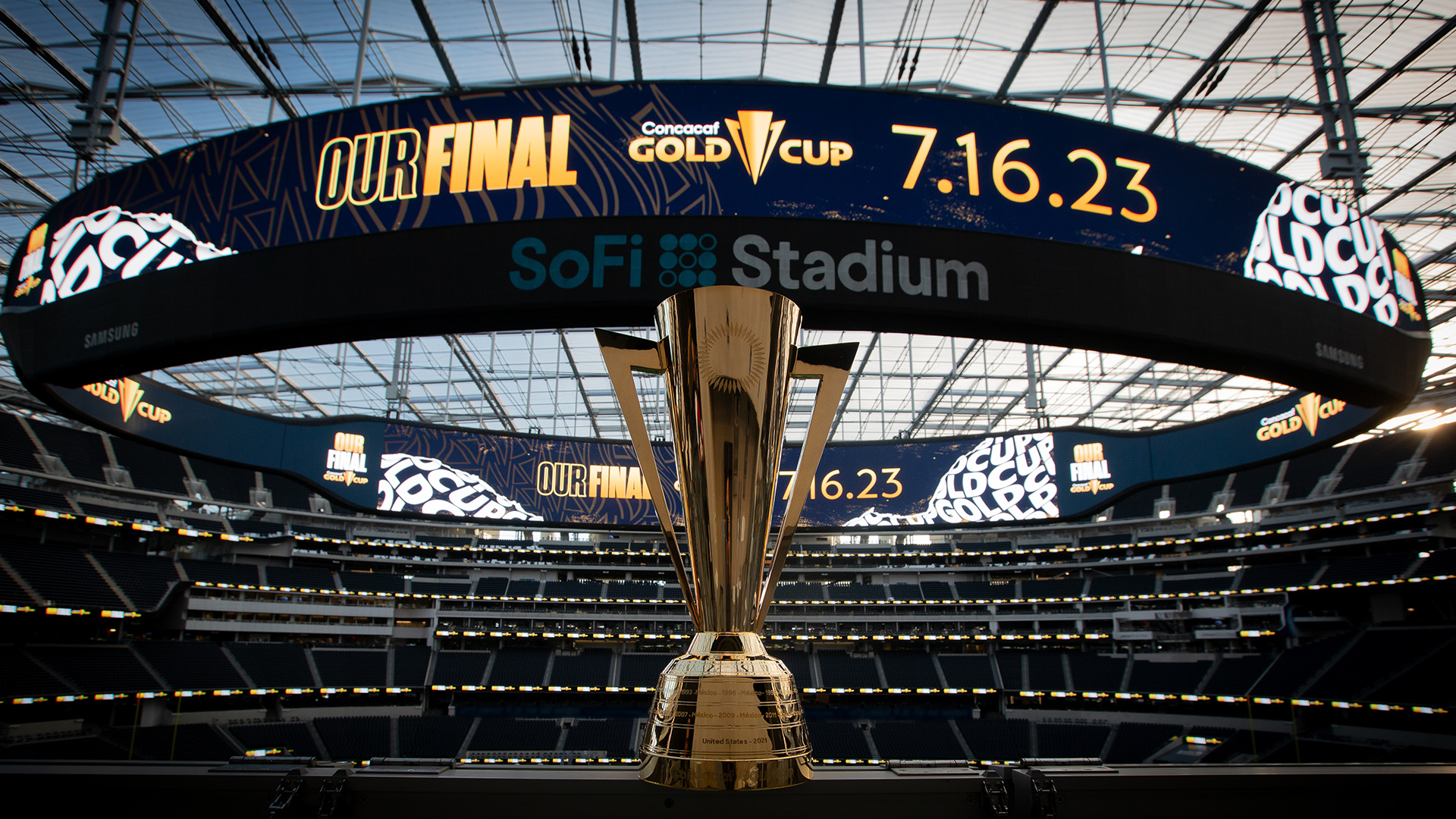 SoFi Stadium will host the tournament’s final on Sunday, July 16, 2023.

Miami, FL – Concacaf has announced that the Final of the 2023 Concacaf Gold Cup – the 17th edition of the Confederation’s flagship men’s national team competition – has been awarded to the world-renowned SoFi Stadium. The state-of-the-art venue, home to the NFL’s Los Angeles Chargers and reigning Super Bowl Champion Los Angeles Rams, hosted the NFL’s Super Bowl LVI and was recently announced as a host stadium for the FIFA World Cup 2026.

Our Final, on Sunday, July 16, will crown Concacaf’s best men’s national team and will conclude two months of elite football in the region that will also include the 2023 Scotiabank Concacaf Champions League Final and 2023 Concacaf Nations League (CNL) Finals.

Additionally, Concacaf has also confirmed important details regarding next summer’s tournament, including the 2023 Gold Cup format, match dates, the nations which have already secured a berth and that the official draw will take place on April 14, 2023.


“SoFi Stadium is a world class venue and Los Angeles has hosted so many iconic Gold Cup moments, making this stadium a fantastic choice to stage our 2023 Concacaf Gold Cup Final”, said Concacaf President and FIFA Vice President, Victor Montagliani. “This competition continues to deliver on and off the pitch, with last year’s expanded edition showcasing outstanding football combined with passionate support from fans from all corners of our wonderful region."

“I am particularly pleased that in addition to announcing such an exciting stadium for our Final, we can also confirm that next year’s Gold Cup will continue to feature a Preliminary Round, allowing even more teams to experience the Gold Cup. This provides more access to top level competition for our members and is very much in keeping with our football first philosophy."

“The 2023 Gold Cup will be the centerpiece of a wonderful summer of Concacaf football which will also include our Nations League Finals and the final of the Concacaf Champions League. These competitions, and the many others we will deliver in 2023, are hugely important for the ongoing development of the game in Concacaf as we seek to harness the momentum and anticipation that is building in our region as we get closer to 2026”, added Montagliani.

“The Los Angeles region has a celebrated history of hosting iconic soccer matches, and we look forward to adding to that legacy when we welcome Concacaf's Gold Cup Final to SoFi Stadium on July 16, 2023," said Jason Gannon, managing director, SoFi Stadium and Hollywood Park. “Over the next few years, SoFi Stadium will be home to some of the world’s biggest soccer matches, and we are excited to host an international audience for the Gold Cup, a premier soccer event in the region.”

Tickets for the Concacaf Gold Cup Final at SoFi Stadium will be made available to the public on Monday, November 7th at 10:00 am PT/local via Ticketmaster.com or GoldCup.org.

This will be the seventh time the Gold Cup Final is disputed in the Los Angeles Metropolitan Area and first in over a decade. The LA Memorial Coliseum hosted four Gold Cup Finals (1991, 1996, 1998 and 2000), while Pasadena’s historic Rose Bowl hosted memorable final matches in 2002 and 2011.

The Gold Cup Final will be the second soccer match held at SoFi Stadium. The venue previously hosted the Leagues Cup Showcase in August 2022.

Following in the footsteps of the 2021 Gold Cup, the competition’s most successful edition ever, next year’s tournament will continue to include a 12-team Preliminary Round (Prelims) and a 16-team Group Stage. All followed by a single match direct elimination Knockout Stage. 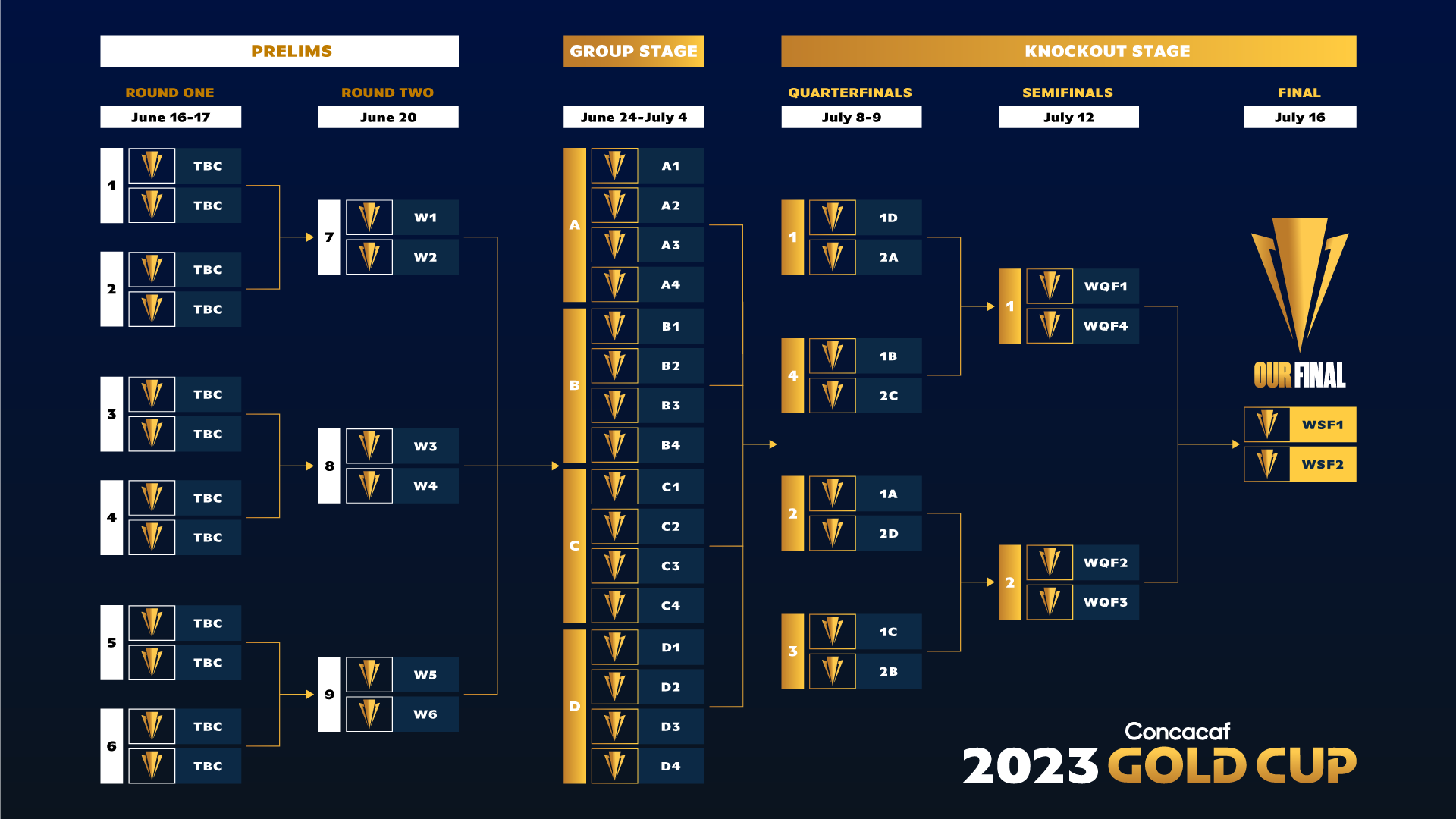 Play will commence the third week of June with the Prelims (June 16-20, 2023) and will include two direct elimination rounds. For Round One, the 12 participating teams will be divided into six pairings. After a single match elimination play, the six match winners will advance to Round Two.

Round Two will include the six Round One winners divided into three matchups. After single match elimination play, the winning team in each of the three Round Two matchups will advance to the Group Stage (three teams in total will qualify from the Prelims to the Group Stage).

Thus far, two nations, Saint Lucia and Puerto Rico have secured a berth into the Prelims. The remaining 10 participants will be confirmed at the conclusion of the 2022/23 CNL Group Stage, in March 2023.

Following Group Stage play, the top two finishers in each of the groups (eight teams) will advance to a Knockout Stage. The Knockout Stage will be comprised of Quarterfinals, to be played on July 8 and 9, Semifinals on July 12, and Our Final at SoFi Stadium, on Sunday, July 16.

The official draw, which will determine the Prelims Round One and Round Two pairings and the Group Stage groups will take place on April 14, once all the participating nations have been confirmed.

Further details regarding the official draw and the complete list of venues which will host matches will be announced at a later date.
Visual assets for media, including stadium imagery and tournament logos are available here.

About Gold Cup
The Concacaf Gold Cup is the Confederation’s premier competition for men’s national teams, crowning a champion every two years. Initially involving eight teams, the Gold Cup expanded into a competition of 24 nations, which qualify via the Concacaf Nations League. The tournament has been contested on 16 previous occasions. Mexico owns a tournament-record eight titles, followed by the United States with seven and Canada with one. For more information about the Concacaf Gold Cup, click here.

About Concacaf
The Confederation of North, Central America, and Caribbean Association Football (Concacaf) is one of FIFA’s six continental confederations, servicing 41 Member Associations, from Canada in the north to Guyana, Suriname, and French Guiana in the south. Concacaf means football first. Our members are united by a shared vision: Love For Our Game, as well as a unique mission, to develop, promote and manage football throughout the region with integrity, transparency, and passion in order to inspire participation in the game.

About SoFi Stadium
SoFi Stadium, the home of the Los Angeles Chargers and reigning Super Bowl Champion Los Angeles Rams, is located at Hollywood Park, a near 300-acre sports and entertainment destination being developed by Los Angeles Rams Owner/Chairman E. Stanley Kroenke in Inglewood, Calif. The 3.1 million square-foot SoFi Stadium is the largest stadium in the NFL, as well as the first indoor-outdoor stadium. It seats approximately 70,000, expandable up to 100,000, with more than 260 luxury suites and more than 13,000 premium seats. SoFi Stadium was host to Super Bowl LVI and will host the College Football National Championship in 2023, the World Cup in 2026 and the Opening and Closing Ceremonies of the Olympic Games in 2028. Adjacent to the stadium and sitting under the same roof canopy is the 2.5-acre American Airlines Plaza and the 6,000-seat YouTube Theater. For more information about SoFi Stadium, visit www.SoFiStadium.com or @SoFiStadium on Instagram, Facebook, Twitter and YouTube.
Share:
Tags:
press-release gold cup 2023 Gold Cup Final SoFi stadium Gold Cup Draw Los Angeles 2023 Gold Cup Tickets tickets