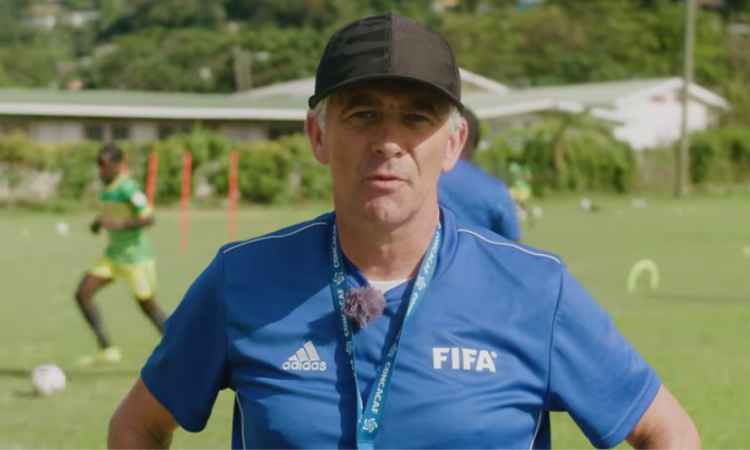 The Canadian Head Coach believes his Spice Boys will put up a brave face as they take on mighty opponents in Group D of the confederation’s marquee national team tournament.

MIAMI, Florida --- Grenada Head Coach Michael Findlay, by his tone, bears no sign of fear as he faces tough opposition in the Group Stage of the 2021 Concacaf Gold Cup.

The Canadian believes his Spice Boys will put up a brave face as they take on mighty opponents in Group D of the confederation’s marquee national team tournament.

Grenada will share the group with Central America’s Honduras and Panama, plus guests Qatar. The Caribbean side opens its account against Honduras on July 13 at BBVA Stadium in Houston.

“The Gold Cup is a great opportunity for us to assess our progress and overall program position, and there is no better place to do that than competing with teams such as Honduras, Qatar and Panama” said Findlay in an exclusive interview with Concacaf.com.

The Canadian says his experience over the years has afforded him workable knowledge on his group rivals.

“I personally know the characteristics of these opponents well through my previous experiences in the Gold Cup, World Cup Qualifying and development program trips to Qatar while I was with Canada’s National Teams as head and assistant coach. Obviously, our staff has done their due diligence on our opponents, and hopefully, we are prepared,” said Findlay.

Findlay admits that while victory is crucial in winning titles and the ambition of every team, there are times when other important developmental goals can be achieved by just competing in a tournament of value.

“Football is always played to win and must be our goal plan all the time, but given the transitional position the program is in, now it’s about setting out goals around our performance standards and our ability to compete at this level within Concacaf on a consistent basis” he noted.

Grenada are not strangers to the Gold Cup, having competed in consecutive editions in 2009 and 2011, but they cannot escape the underdog tag.

“Absolutely, we are the underdog… Frankly I don’t believe many people expect any success from us, except for myself, the staff, and most importantly, our players. But I like the underdog position” said the 57-year-old manager.

Still, Findlay thinks Grenada’s football has matriculated since those early days at the Gold Cup.

“We have entered a transitional program, and that comes with introducing new elements on and off the field to guide us in growing, along with setting new standards and expectations. So yes, I think we are a different Grenada” he stated.

Findlay says while he strives for balance in his team, he singled out a few players who he says will be critical in influencing that outcome.

“What is a very positive situation in this group of players is the overarching balance we are establishing within the program, which can only help. We certainly will look to our most experienced players, such as Aaron Pierre, Omar Beckles, A.J. Patterson and Jamal Charles to guide us, but we are also looking forward to players stepping up and introducing themselves to the Gold Cup and Grenada,” he said.

Even though he was not yet at the helm at the time, Findlay praised those who steered the team through the Concacaf Nations League, which serves as the qualifying mechanism for the Gold Cup.

“First, you have to commend the former coaching staff and the players, as they got the results needed. I think the internal belief, relationships and fight were critical in the success and we wish to continue to build on that” he expressed.

He said continuing to build on the success of the team would not only be a great benefit to the country’s football program, but the psyche of a nation that values its sports for men and women.

“Grenada has a great sporting history and demands success. They are also a passionate people who wish for nothing but success. I think a positive display, along with displaying a fight in our application, will go a long way in the appreciation and continued support from our passionate fans” Findlay concluded.