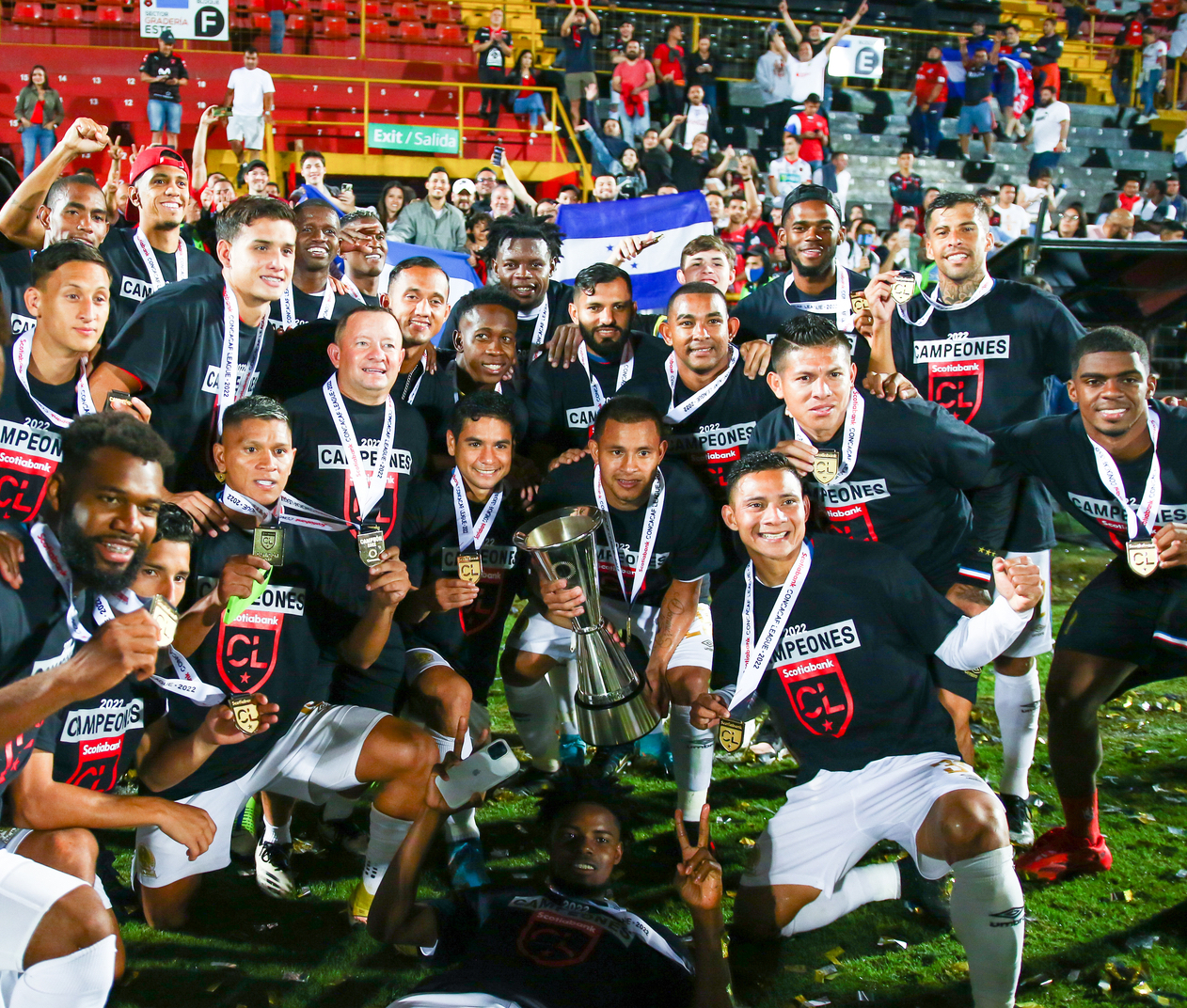 Olimpia players celebrate with the Trophy at the Estadio Alejandro Morera Soto in Alajuela, Costa Rica on November 2, 2022.

MIAMI, Florida – The sixth and final edition of the Scotiabank Concacaf League was played in 2022 in which Honduran giants CD Olimpia emerged as the champions after a thrilling 5-4 aggregate win over Costa Rican side Alajuelense in the Final.

As part of Concacaf’s countdown of the best 22 moments from 2022 in the region, here are the top stories from the past year in the SCL.

It was fitting that CD Olimpia were the ones to capture the final SCL crown. In the inaugural edition in 2017, Olimpia won the title in dramatic fashion, defeating Santos de Guapiles of Costa Rica 4-1 in a penalty shootout following a 1-1 draw. Five years later, the Honduran side repeated that feat, becoming the first two-time champion of the SCL, thus forever being known as the tournament’s first and final champion.

Olimpia had to overcome many hurdles to reach their objective. It all started with a very difficult Round of 16 encounter against Municipal of Guatemala in which Olimpia had to play with nine men during part of the second half of the first leg. Nevertheless, they squeezed out a 2-2 draw and then won the series 3-2 on aggregate with a 1-0 home victory in the second leg.

A 7-1 aggregate victory over Diriangen of Nicaragua in the quarterfinals set up a semifinal showdown with long-time domestic rivals Motagua and the series was fiercely contested. All signs pointed to a 0-0 draw after the two legs and a penalty shootout, but Carlos Sanchez had other ideas and struck for the winning goal in the 87’ for a 1-0 Olimpia win.

The Final with Alajuelense was just as intense, as a 3-2 Olimpia first leg win in Honduras saw Alajuelense counter with a 2-1 advantage late in the second leg in Costa Rica, a result that would have forced extra time. In the end, though, Olimpia’s championship pedigree surfaced and a goal in the 88’ from Gabriel Araujo secured a 5-4 aggregate victory and a perfect SCL ending for Olimpia.

The 2022 SCL marked Diriangen’s third appearance in the tournament, after being eliminated in the Round of 16 in 2018 and then in the Preliminary Round in 2021. Seeking their first ever series win in the SCL, the Pinoleros found themselves drawn with 2021 champions Comunicaciones of Guatemala in the Round of 16.

It was a challenge that Diriangen embraced to the fullest. In the first leg in Guatemala, the club earned their first ever SCL win by defeating the Chapines 1-0 on a goal from Ramiro Peters. Knowing that Comunicaciones were going to be coming with full force in the second leg in Nicaragua, Diriangen countered by striking for an early goal through Robinson Da Silva and eventually grinding out a 1-1 draw in the game and a 2-1 win on aggregate. It was also the first time that a team from Nicaragua eliminated a Guatemalan club in the SCL.

To achieve a first ever series win in the SCL was a great accomplishment for the Nicaraguan club, but to do it against the reigning champions made it even sweeter.

Never before in the history of the SCL had a team from Belize won a series until Verdes achieved that feat in the Preliminary Round against Platense of El Salvador. The two teams battled to a 0-0 draw in the first leg, which in itself was a significant moment because it was the first time that a club from Belize earned a result in an SCL match.

Things opened up in the second leg in El Salvador, as a pair of first half goals through Luis Ibarra and Edwin Villeda put Verdes in control with a 2-0 halftime lead, only to see Platense strike back with a pair of scores in the second stanza. However, with the away goal tiebreaker in place, Verdes were able to lock things down the rest of the way and make history for football in their nation.