Concacaf to launch revamped W Championship and new W Gold Cup
Tell us what are you looking for:

Miami, FL (Thursday, August 19, 2021) – Concacaf has revealed the details for its new and exciting senior women’s national team competitions taking place from 2021 through 2024. The structure will include two major centralized summer tournaments – the Concacaf W Championship in 2022 and the Concacaf W Gold Cup in 2024.

This new calendar prioritizes providing more official match dates for all Concacaf region women’s senior national teams and ensuring there is elite competition to showcase the highest level of women’s international football in the Confederation.

The first phase of this new women’s national team ecosystem begins in November 2021, with the Concacaf W Qualifiers which will include 30 Concacaf nations and serve as qualification matches for the W Championship which takes place in 2022, thus beginning the Road to the FIFA Women’s World Cup 2023 in this region for all competing nations.

The draw for the Concacaf W Qualifiers takes place on Saturday, August 21 at 3:00 pm ET.

“This is a seismic development for our women’s national team competitions and will transform the women’s game in Concacaf,” said Concacaf President and FIFA Vice President, Victor Montagliani. “When we launched our Concacaf W strategy in 2019 we committed to providing more opportunities for all member associations. This new ecosystem wholeheartedly delivers on that and the inclusion of an inaugural Concacaf W Gold Cup as a central part it is a truly exciting step in our journey to further elevate women’s football. I can’t wait to see these matches and new competitions unfold on the pitch and hope they inspire future generations of women and girls to play and develop a passion for the game,” added Montagliani.

“These new competitions will be game-changing for women’s football in Concacaf. I am so excited for the draw this weekend and the first qualification matches for 30 of our women’s national teams in November this year,” said Concacaf Head of Women’s Football Karina LeBlanc. “We are providing a platform for women footballers in Concacaf to thrive, and for women and girls throughout the region to support their national teams with pride,” added LeBlanc.

The structure of the two new competitions and their qualifiers will be as follows:

The 30 Concacaf Member Associations participating, all ranked 3 and below in the FIFA Women’s Ranking as of July 2021, will be divided into six groups of five.

After group stage play, where each nation will play two matches at home and two matches away, the top finisher in each of the groups will advance to the Concacaf W Championship, joining the top two ranked Concacaf nations (USA and Canada) who receive a bye straight to the W Championship.

The official draw for the 2021 Concacaf W Qualifiers will take place on Saturday, August 21 at 3:00 pm ET, from Miami, FL. Fans will be able to follow the event live on Concacaf GO via the Confederation’s Official App and Website, Facebook page, and YouTube channel (subject to territory restrictions).

The first of the two major summer competitions, the Concacaf W Championship, will take place in 2022 and will serve as the Confederation’s Qualifier to the FIFA Women’s World Cup Australia and New Zealand 2023 and the 2024 Paris Summer Olympic Games.

The eight participating nations, including the USA and Canada, and the six Concacaf W Qualifiers group winners, will be divided into two groups of four teams. After group stage play, the top two finishers in each group will qualify for the competition’s semifinals and guarantee their place in the FIFA Women’s World Cup Australia and New Zealand 2023.

The knockout stage of the W Championship (semifinals, third-place match, and final) will be played in a single match direct elimination format.

At the conclusion of the event, the winning nation will guarantee its place in the 2024 Paris Summer Olympic Games Women’s Football Tournament and the 2024 Concacaf W Gold Cup. The runner-up and the third place will progress to a Concacaf Olympic play-in series to be played in September of 2023. The winner of the play-in will also guarantee their place in Paris and the W Gold Cup.

The W Gold Cup Final will not only crown the champion of what is now Concacaf’s flagship women’s international competition, but it will also cap off a 4-year cycle where teams from the region will have competed in a minimum of 195 official matches, which represents 118% increase in comparison to the previous four-year cycle.

Together, the 2021 Concacaf W Qualifiers, 2022 Concacaf W Championship, 2023 Road to Concacaf W Gold Cup, and 2024 Concacaf W Gold Cup will accelerate the growth of Women’s Football and provide a consistent structure of matches and competitions for our Member Associations. They will also inspire the next generation of women and girls in our region to develop a passion for football. 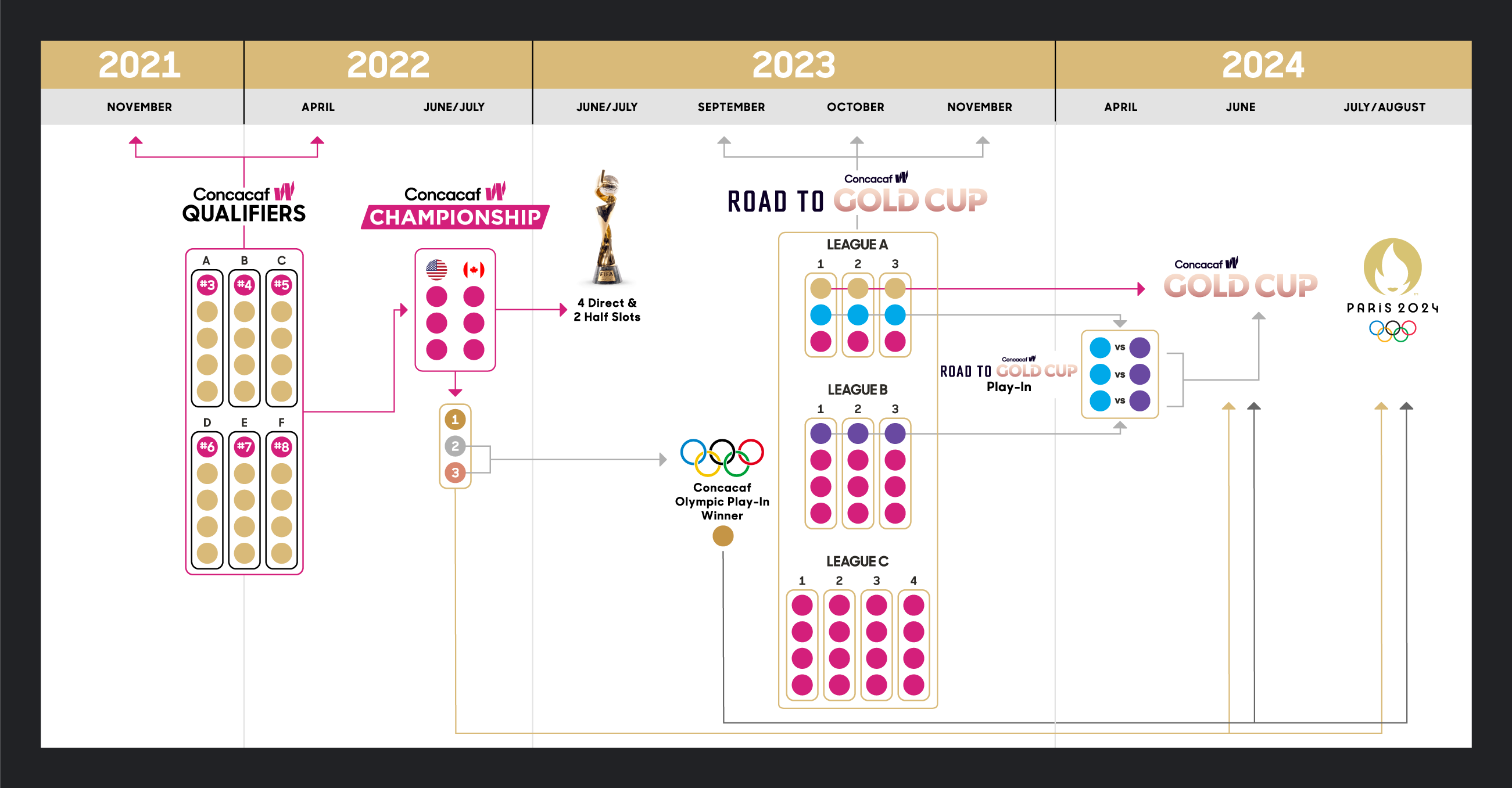 Concacaf has also launched a campaign to celebrate women and girls' football across North America, Central America, and the Caribbean.

The launch of the new women's national team competitions are the centerpiece of the week's activity, which also includes We Belong digital panel discussions about women's football in Concacaf and the draw for the Concacaf W Qualifiers on Saturday. The draw event will be shown live on Concacaf's digital and social media channels. Further details about the We Belong campaign activities and how to get involved include:

*Spanish translation and closed captioning available. The sessions will be recorded and made available through our Concacaf W channels for those unable to join live.