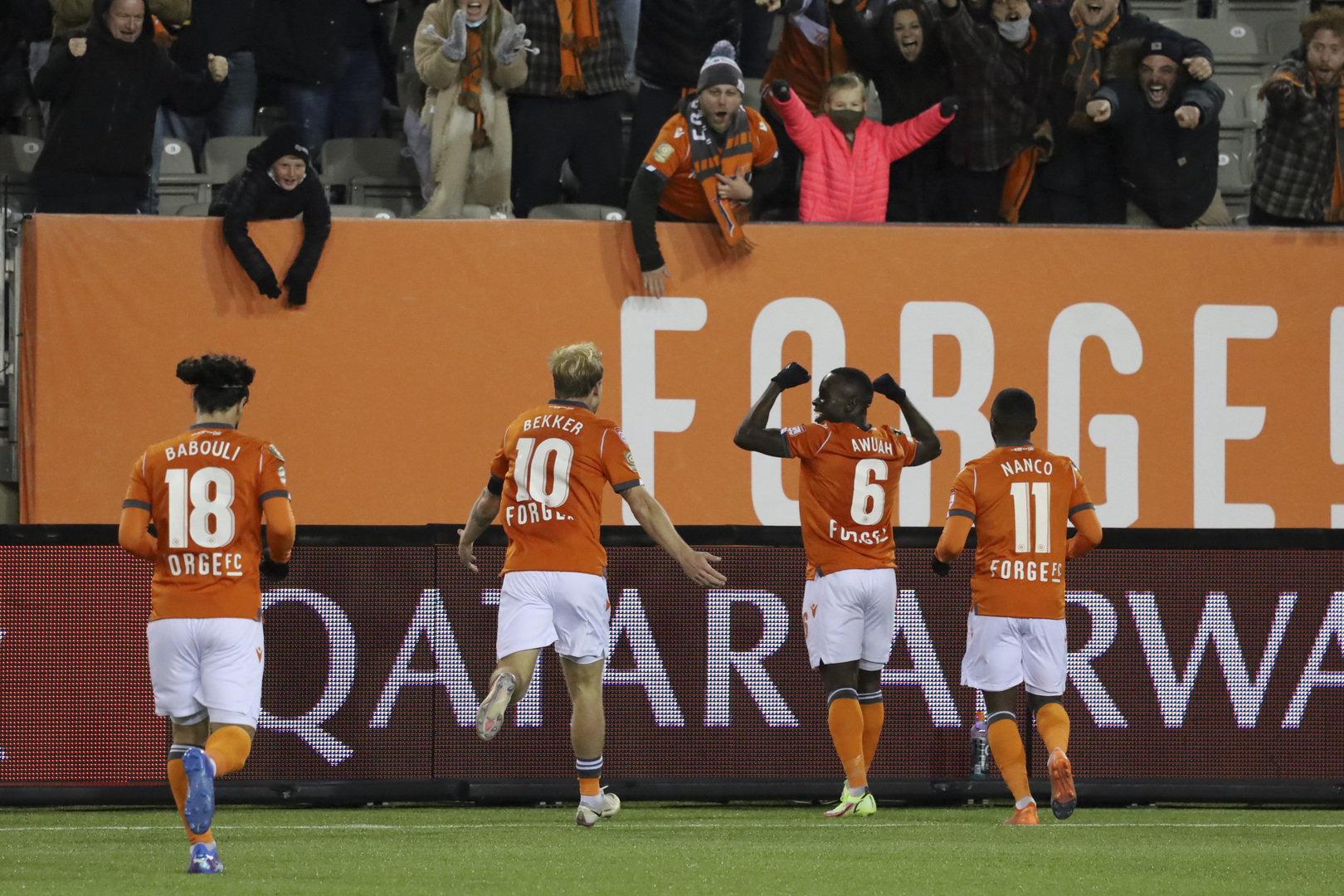 Kwame Awuah #6 of Forge FC celebrates with teammates after sscoring their team´s second goal to give Forge a dramatic 2-2 draw at home against Motagua in the final seconds of second half stoppage time on November 24, 2021.

MIAMI, Florida – The first legs of the 2021 Scotiabank Concacaf League semifinals are in the books, with each game providing some riveting action. Here are the top five moments from the two games.

It looked like Forge’s impressive unbeaten run at home in SCL would come to a close at the fifth time of asking, but Kwame Awuah had other ideas and was Johnny on the spot by knocking home a rebound of a long-distance shot to give Forge a dramatic 2-2 draw at home against Motagua in the final seconds of second half stoppage time. Forge are now 2W-3D-0L all-time in home matches in the SCL.

Lezcano a man of all rounds

Andres Lezcano had been a model of consistency in the 2021 SCL and he demonstrated that in spades with his winning goal in Comunicaciones’ 1-0 triumph over Guastatoya. Not only did he become the leader in goals scored in the tournament with four with his score against Comunicaciones’ domestic rivals, but he has now scored a goal in every round.

With his start on Wednesday night, Kevin Lopez appeared in his 25th SCL match, a quarter-century of games in the tournament, and the most of any player. A key member of Motagua’s runs to the 2018 and 2019 Finals, Lopez once again played a pivotal role for his side, scoring his third goal of the 2021 SCL in what was Motagua’s opening score.

Comunicaciones a tough foe on the road

For teams that want to win the SCL, getting results on the road is paramount, and as of right now Comunicaciones looked to have found the formula to do that. With their 1-0 away win in the first leg against Guastatoya, the Cremas now have an impressive 3W-0D-1L away record in the 2021 SCL. Of note is the fact that they have scored eight goals while playing as the road team and registered three clean sheets. Even in their lone defeat, a 4-3 quarterfinal first leg loss at Saprissa, they still displayed their strong attack in scoring three away goals, which ultimately gave them the tiebreaker in the 5-5 aggregate draw.

History already to be made

No matter what the Final pairing ends up being, history will have been made. If Forge reach the Final, it will mark the first time that a team outside of Central America have reached the Final of the SCL, meanwhile it is a certainty that a Guatemalan club will play for the SCL title for the first time ever. The results of this week’s first legs are further proof that with each year, the SCL continues to grow and improve.