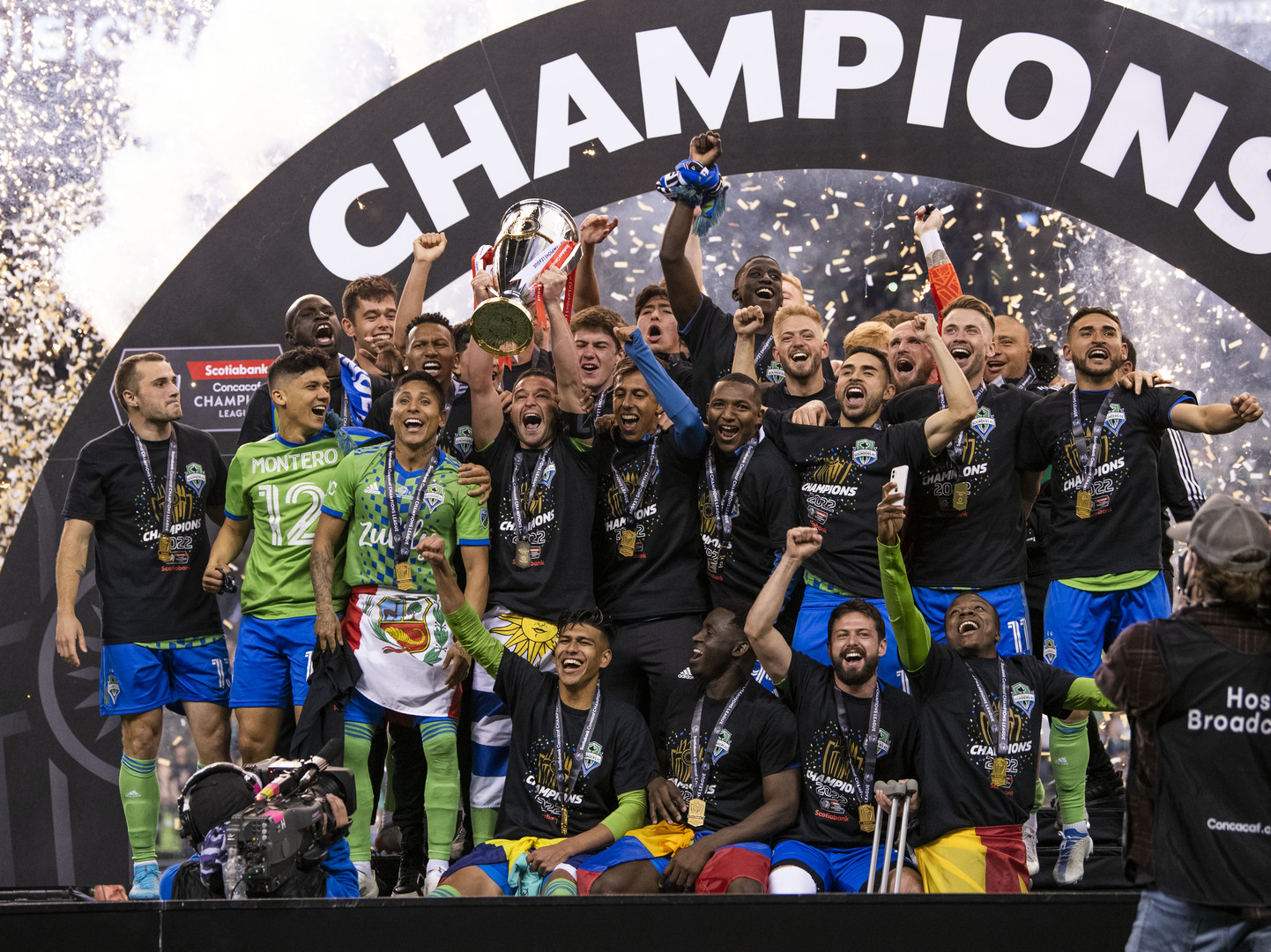 The Seattle Sounders FC players celebrates at the Lumen Field in Seattle, Washington on May 2, 2022.

SEATTLE, Washington – The Scotiabank Concacaf Champions League once again produced a slew of wonderful memories and moments over the course of the two-and-a-half months of competition.

Here are five moments that stood out the most from the 2022 SCCL:

Saprissa's Bolanos turns back the clock

When the Draw for the tournament was revealed and Costa Rican giants Deportivo Saprissa were pitted against Pumas of Mexico in the Round of 16, the memory of the 2005 Concacaf Champions Cup Final between the two teams came flooding back. One of the heroes of that Saprissa team that lifted the title was Christian Bolanos, and nearly 17 years later, Bolanos was once again central to a Saprissa-Pumas series.

The 37-year-old turned the clock back with his performance in the first leg, scoring a pair of goals against Pumas and nearly tallying a third in spectacular style with a scorpion-like back-heel that rang off the crossbar. It was a vintage performance from the veteran attacker in the teams’ 2-2 draw.

Comunicaciones qualified for the 2022 SCCL by virtue of their performance in the 2021 Scotiabank Concacaf League in which they lifted the title. But the Cremas were keen to do the same in the SCCL and their warrior spirit won over many neutrals. Locked in a tight duel with the Colorado Rapids in the Round of 16, Comunicaciones overcame a sending off in the 15’ of the second leg away to earn a 1-1 draw on aggregate and force a penalty shootout during which GK Kevin Moscoso made three stops in a 4-3 shootout win.

The Guatemalan side then nearly pulled off an astounding rally against New York City FC in the quarterfinals. Down 5-2 on aggregate with just 21 minutes to play, Comunicaciones scored three goals to pull within the brink of a series win, only to fall valiantly short on the away goal tiebreaker. Still, it was a performance that won’t soon be forgotten.

Dinenno leads Pumas' comeback for the ages vs. New England

One night after Comunicaciones’ near-miss, Pumas would complete a comeback for the ages in their quarterfinal second leg against the New England Revolution. Down 3-0 to begin the night, Pumas struck for three goals by the hour mark to pull level. Two of those scores came from 2022 SCCL Top Scorer Juan Dinenno, who finished the tournament with nine goals.

With the aggregate scoreline at 3-3 at the full-time whistle, matters were settled in a penalty shootout, where veteran Pumas GK Alfredo Talavera helped get the job done with a key save in a 4-3 win. It was just the second time in SCCL history that a team had rallied from a 3-0 first leg deficit to win a series.

The Seattle Sounders displayed a tenacity throughout the 2022 SCCL that carried them across the finish line. The team never suffered a defeat in their eight matches, drawing all four away legs, while winning every single home leg. The crowning moment was Wednesday night’s Final second leg 3-0 win in which Seattle’s three attacking stars, Raul Ruidiaz, Nicolas Lodeiro and Jordan Morris all came through. Ruidiaz had two goals, Lodeiro had a goal and an assist and Morris had a crucial hand in the build-up of the team’s second and third goals.

But there were contributors from everywhere. GK Stefan Frei was Best Goalkeeper and Best Player awards, MF Cristian Roldan contributed five assists and won two penalties and DF Xavier Arreaga led all players in the 2022 SCCL with 42 clearances. No doubt this was a complete team performance from Seattle.

Sounders a history-making team in many ways

There was no shortage of history made in Seattle’s 2022 SCCL conquest. First and foremost, they became the first team from Major League Soccer to win a Concacaf club title in the SCCL era. The 68,741 fans who attended the Final second leg at Seattle’s Lumen Field also set an attendance record as not only the most attended SCCL Final match, but also the SCCL match with the highest attendance ever.

Several Seattle individuals made history as well. Brought on as a first half substitute for the injured Joao Paulo, Seattle MF Obed Vargas became the youngest player to play in an SCCL Final (16). Head Coach Brian Schmetzer became just the second United States coach to win the SCCL, joining Bruce Arena (1998) on that select list. FW Fredy Montero also made history during the tournament by equaling Alvaro Saborio’s mark as the MLS player with the most goals in the SCCL (10).

Both at the team and individual level, it was a history-making SCCL for Seattle.