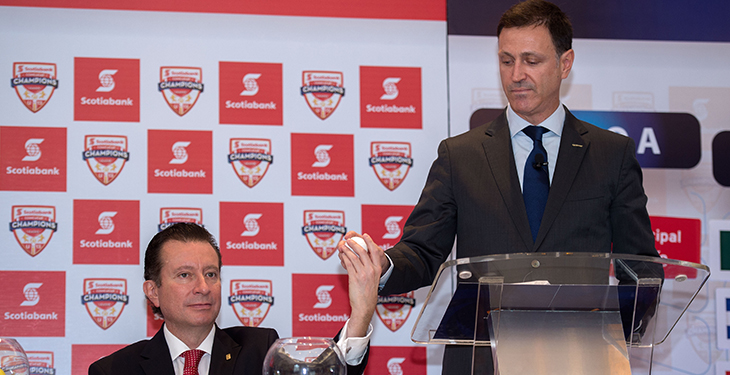 CONCACAF and Scotiabank conducted Wednesday the draw for the third edition of the Scotiabank CONCACAF Under-13 Champions League.

MEXICO CITY – CONCACAF and Scotiabank conducted Wednesday the draw for the third edition of the Scotiabank CONCACAF Under-13 Champions League at the JW Marriott in the Polanco section of Mexico City.

The event, which determined the groups for the tournament to be played from August 5-12, was opened with a welcoming address from CONCACAF General Secretary Phillipe Moggio. Also present were Hector Paniagua, Deputy General Director of Consumer Banking at Scotiabank in Mexico, and Juan Adalberto Lopez, General Director of Amateur Programs of the Mexican Football Federation.

“It is a pleasure to announce the third edition of the Scotiabank CONCACAF Under-13 Champions League. We would like to thank our commercial partner Scotiabank for believing in CONCACAF and in our youth, while offering this important development platform,” said CONCACAF General Secretary Philippe Moggio. “The international tournament provides a significant opportunity to encourage football passion, foster talent as well as fair play values, which are essential for the future generations within the region.”

The sixteen participating clubs from ten CONCACAF nations were drawn into four groups of four for round-robin play. The competition will be played at the Federación Mexicana de Fútbol’s new facilities in Toluca.

"At Scotiabank we are commitment to continue supporting amateur athletes. We are proud to host this championship once again in Mexico, as well as to witness the enthusiasm and talent of the players from the countries they represent,” said Hector Paniagua, Deputy General Director of Consumer Banking at Scotiabank Mexico