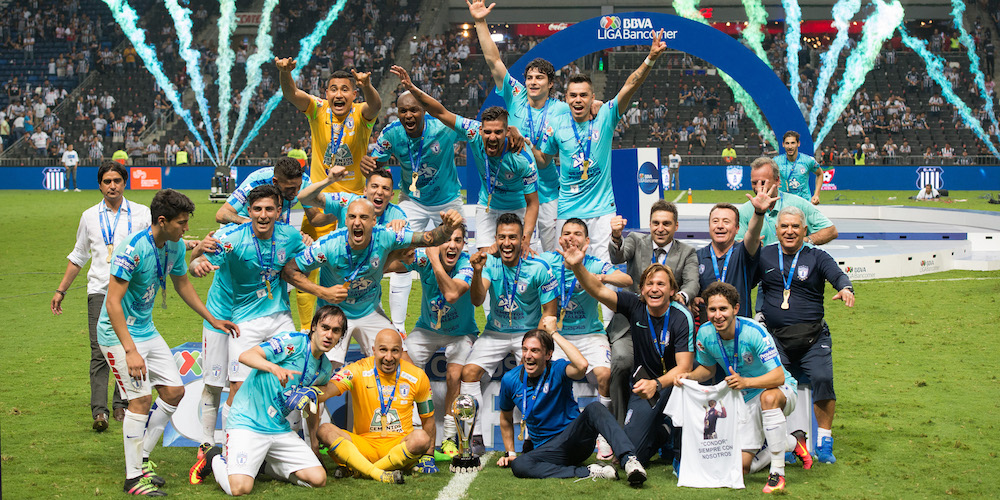 Pachuca earned its sixth domestic title with a dramatic 1-1 draw at Monterrey in the second leg of the 2016 Liga MX Clausura final to win the series 2-1 on aggregate.

MONTERREY, Mexico – Pachuca earned its sixth domestic title with a dramatic 1-1 draw at Monterrey in the second leg of the 2016 Liga MX Clausura final to win the series 2-1 on aggregate.

Victor Guzman equalized for the 10-man visitor in the third minute of second-half stoppage time, heading past goalkeeper Jonathan Orozco and stunning the crowd of 50,302 at the Estadio BBVA Bancomer.

Both sides had already earned places in the 2016/17 Scotiabank CONCACAF Champions League (SCCL), but the conclusion was remarkably similar to the one that gave Pachuca the 2009/10 confederation crown.

In the second leg of that edition’s final against Cruz Azul, Edgar Benitez struck in the second minute of stoppage time at the end of the second leg. The goal leveled the two-legged final at 2-2 as the Tuzos lifted the trophy on the away-goals rule.

Monterrey took a 1-0 lead in the 39th minute through a brilliant goal by Dorlan Pabon, just eight minutes after teammate Edwin Cardona missed on a penalty kick. The 28-year-old Colombian was positioned outside the Pachuca penalty area on the left. From near the left-goal line, Walter Ayovi rolled a pass through the upper-left corner of the box. Pabon ran on to the ball and shifted emphatically towards the middle, before firing a right-footed shot into the lower-right corner from 23-yards out.

Pachuca was reduced a player in the 74th minute, when an awkward attempted clearance by Aquivaldo Mosquera went directly into Pabon’s chest. The Monterrey forward raced towards the box, only for Mosquera to grab at his feet in order to prevent a clear scoring opportunity. Referee Fernando Guerrero had no choice but to issue a straight red card.

Despite being down a man, Pachuca clawed back to equalize. After receiving the ball back from his initial throw-in on the left side, Emmanuel Garcia lofted a cross into the Monterrey penalty area. Sensing a chance, Guzman took a running start from the beyond the box and jumped high over Edgar Castillo to head the ball into the right side of the net.

Goalkeeper Oscar Perez, 43, was outstanding for Pachuca, making numerous saves, especially during a first half that saw the host generate a majority of the chances.

The Tuzos last lifted the trophy after the 2007 Clausura, while Monterrey – a three-time SCCL champion -- remains on the search for its first Mexican league championship since the 2010 Apertura.