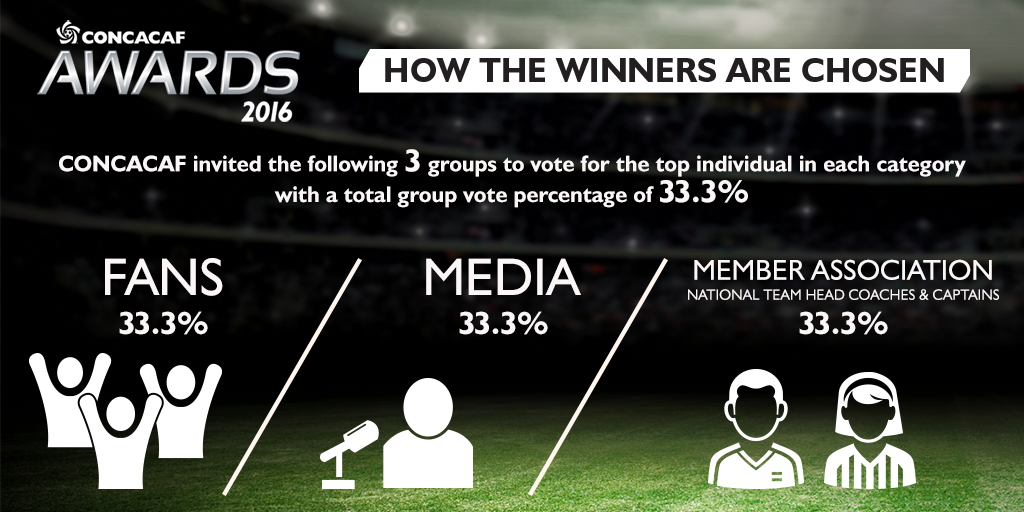 Accrued Vote Will Be Tabulated and Winners in 11 Categories Announced on January 18 on CONCACAF.com

Accrued Vote Will Be Tabulated and Winners in 11 Categories Announced on January 18 on CONCACAF.com
Miami (Wednesday, January 11, 2017) – The Confederation of North, Central America and Caribbean Association Football (CONCACAF) announced today the successful closing of the voting period for the Fourth-Annual CONCACAF Awards, with record participation from fans, media members and national team captains and coaches from across the Confederation.

The fan vote shattered record for participation in all categories, with nearly 1.3 million votes cast by fans from CONCACAF’s 41 Member Associations and around the world, as players, coaches and referees garnered votes in eleven categories. Leaders in the fan vote have been announced via concacaf.com, and those totals will now be added to the final media and official Member Association votes to determine the ultimate winners in each category.

Member Associations’ men’s and women’s national team coaches and captains, as well as media members have also submitted their votes, which are currently being tabulated to determine the winners.

As previously announced and similar to previous editions of the awards, the national team coaches and captains from across the Confederation will account for one third of the final vote, and accredited members of CONCACAF’s media center will contribute another third of the tally. Fans from around the region and the world who voted online comprise the final one-third segment of the vote.

The winners will be announced on Wednesday, Jan 18, via CONCACAF.com