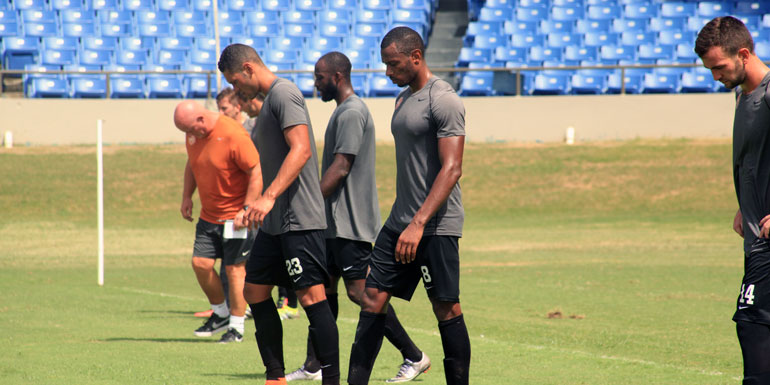 After a lengthy preseason, Puerto Rico FC is ready to embark on its debut in the North American Soccer League with a franchise-opening match against visiting Indy Eleven on Saturday at the Estadio Juan Ramon Loubriel.

Puerto Rico FC, shown above during a recent training session in Bayamon, Puerto Rico, will make its NASL debut on July 2, 2016, against the visiting Indy Eleven. (Photo courtesy of Puerto Rico FC)

BAYAMON, Puerto Rico -- After a lengthy preseason, Puerto Rico FC is ready to embark on its debut in the North American Soccer League with a franchise-opening match against visiting Indy Eleven on Saturday at the Estadio Juan Ramon Loubriel.

Head coach Adrian Whitbread is excited to get started, but doesn’t want his players’ to be in adrenalin overdrive. The former Puerto Rico Islanders manager hopes they enjoy the historical nature of the occasion, but is also taking a practical view.

“It’s been a long time coming, but we have to be in control of our emotions when the match starts,” the 44-year-old said. “For them it should be just another game in which the goal is to get the three points. Of course they have to enjoy this game because it will never happen again, it’s our first game ever so it is special, but in order for us to win they have to keep control of their emotions.”

Veteran midfielder Christopher Nurse, who had two stints with the now-defunct Islanders, emphasized the importance of experience ahead of the match and the NASL’s fall season.

"The coaches have been in this situation before, they know what the league is about,” remarked the 32-year-old. “The team is going to be very competitive and come Saturday night we’re going to be ready to put on hopefully a winning performance against Indy Eleven."

The Guyana international sees similarities between Islanders and Puerto Rico FC, especially as it pertains to ambition.

“This is a completely different franchise, a new ownership and a new operation,” Nurse commented. “The fan base is there from the Islanders, but what’s going to be happening here will be more professional. Reaching the (CONCACAF) Champions League and winning the second division title are some of the achievements that we’ll have to emulate with the new franchise.”

Puerto Rico FC is owned by Carmelo Anthony, who plays for the New York Knicks in the NBA.