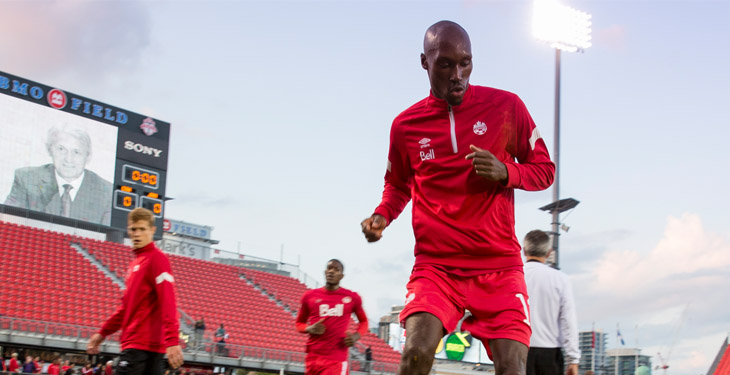 Canada Soccer announced Friday that Atiba Hutchinson is the male selection for the 2015 BMO Canadian Players of the Year award.

Atiba Hutchinson (pictured) was named the male selection for the 2015 BMO Canadian Players of the Year award on December 18, 2015. (Photo: Canada Soccer)

OTTAWA -- Canada Soccer announced Friday that Atiba Hutchinson is the male selection for the 2015 BMO Canadian Players of the Year award.

He shares the honor with defender Kadeisha Buchanan, who was named the female choice a day earlier.

"Atiba continues to excel as one of Canada's great footballers in the world's biggest sport, as witnessed in our memorable November home win at BC Place in the 2018 FIFA World Cup Russia qualifiers," said Victor Montagliani, Canada Soccer President. "As a four-time winner of this award, he ranks amongst Canada's best athletes. We congratulate him, his family, his teammates, and all the coaches that have helped him shine as a footballer."

With the national team, the 32-year-old midfielder appeared in four World Cup qualifying matches this year, helping to eliminate Belize in third round of CONCACAF play and then playing an important role in a fourth-round win over Honduras (1-0, home) and a draw at El Salvador (0-0, away).

At the club level, Hutchinson aided Besiktas in finishing third in the 2014/15 Turkish Süper Lig standings and qualifying for the UEFA Europa League. In the second half of calendar year, Besiktas has occupied the top spot in the 2015-16 domestic table since early October. In the Europa League, he played in six games as the club missed progressing beyond the group phase by a single point.

"We are very proud of Atiba Hutchinson," said Canada head coach Benito Floro. "He is the player that coaches and teammates want to have around. Full congratulations to him and his family."

Orlando City forward Cyle Larin finished second in the voting after completing the 2015 MLS season with 17 goals in 27 games.