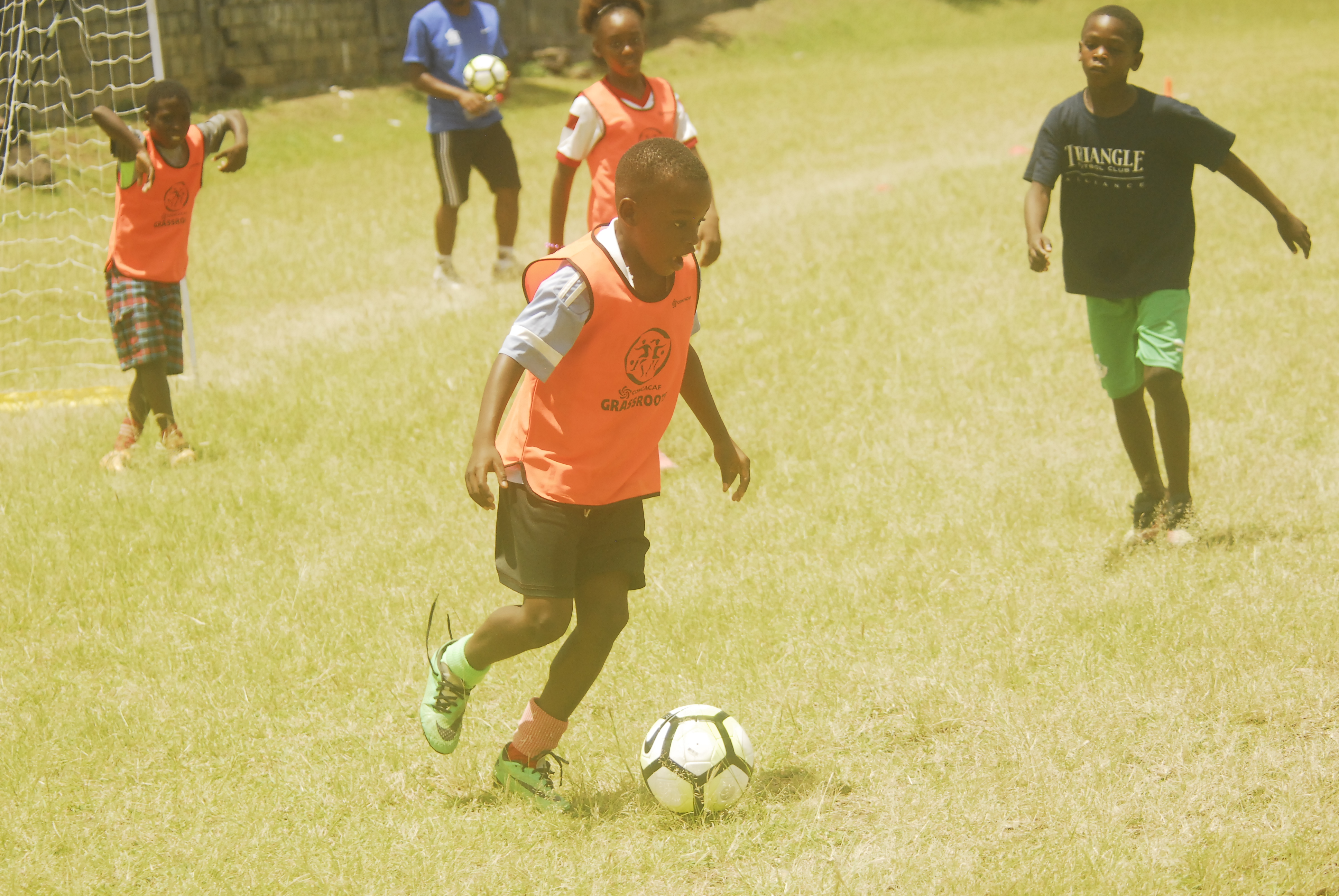 Kingston, Jamaica - Concacaf’s new grassroots initiative has received the proverbial thumbs up for its developmental and life-changing values.

Concacaf NextPlay, a grassroots pilot program aimed at exposing school age children to the game of football and to help shape them into good citizens, is seen as a winning model by those with direct responsibility for its implementation in Caribbean territories in an initial roll out.

“The Concacaf NextPlay Program is alive and well… we have done grassroots in other ways, whether community specific and parish wise previously, but Concacaf is focused on trying to do it through the school system, and specifically with the primary schools,” said the man overseeing the Jamaican activation.

“Our goal is to use football as a social tool in addressing the social issues being faced in our communities, in our nation, and with football being such a powerful tool, we did training of the coaches to prepare them to use football, outside of the dribbling and the passing, but how to tie that into a life skill and teaching that,” added Virtue.

The former Jamaica youth player noted that the coaching conducting the sessions with the selected primary schools - Iris Gelly, Jones Town, Braeton and Port Henderson - have been reporting success across the board.

“The coaches have been doing it (executing NextPlay) and they have been getting very good feedback from the school principals, the parents and the participants as well.

“At the moment because this is exams and graduation week, the activities and training for the schools finished last week and we are now in evaluation mode with them,” Virtue noted as he gave an update of the program, a five-week activity.

He said while many aspects of the program’s implementation and execution have warmed his heart, he takes particular pride that the specially trained coaches have bought into and immersed themselves into the mission.

“The highlight for the coaches is to just being able to have rap sessions or huddle time with the kids where the coaches sit down and talk with them on what they just learnt.

“They may have learnt about passing, but what’s important is how does that come into life, what is happening in their communities, so the coach is that bridge for them, which is the uniqueness of this initiative and we have got that right.

“So now we are asking what’s next? Can we keep going? Do we stop? I think it is a good challenge to have from a Concacaf perspective, so the assessment and evaluation now being done is that when it launched in a bigger way there could be benefits for more schools and for more coaches to benefit for the coaching as well as the program,” Virtue told concacaf.com.

Virtue, who also chairs the JFF Youth Development Committee, believes the Concacaf NextPlay has the potential to define the course forward in grassroots development.

“As a developmental tool, what we have here is an opportunity as you have clubs and schools doing it, but we want more participation in the game, and with Concacaf taking the decision to invest at the grassroots level is ensuring that football continues to be our number one sport.

“We say it is our number one sport in our region, but unless we do something intentional then it won’t be as there are other competing situations with our young people either with them staying at home and not coming out to play, or engaging in other sports, so football has to do more, it has to be exciting, it has to be available, it has to be accessible,” Virtue noted.

“From a structure standpoint, doing it through an institution like our primary schools and having partnerships with key stakeholders like the Ministry of Education is key and they are very supportive of it because physical education is paramount in ensuring that the kids are balanced, not only in the classroom, but outside.

“I think for us and Concacaf we are not seeing education as just being limited to the classroom because you know that football is a teacher and from a developmental standpoint. Yes we are going to teach them the basics, but in teaching the basics, there is also a lot for the kids to learn about life and themselves,” said the Jamaican, hardly able to contain his excitement at the success of the program and its prospects.

Virtue said already the social aspects has started to bear fruits, and he gives high marks to the program for not just focusing on teaching the fundamentals of the game, but embracing the philosophy that targets the making of the total person in the process.

“For me I am very excited about this initiative, and the element of using football as a social tool to address life issues - the crime, the violence, single parenting, and so many other issues.

“Football is so powerful a medium and we have not used it in such a way that we can touch on those situations, so as coaches we become mentors, father figures. I think what Concacaf has started is very important and I believe once it is accepted by the other coaches and schools as a tool to complement to what they are doing it, then you find that there is a lot that can come from it.

“When you listen to parents, guidance counsellors, teachers, they are supporting it (Concacaf NextPlay) because it is not just talking about the star player and who can score the most goals, it is addressing issues that they are facing in the classrooms about discipline, attitude, about being punctual, and generally addressing life issues and they (school community and parents) are in full support of it as it is helping them,” he said.

Through the initiative being carried out as a pilot program across Countries including Barbados, The Bahamas, St Vincent and the Grenidines and Jamaica, Virtue thinks football can once again score as a beacon of hope and social change.

“For me I believe it (football) is a huge thing and we cannot underestimate its value to our football landscape and our people as we don’t want our youngsters to just grow up and be great footballers and not good human beings.

“We are not just coaching the sport, but a life through the sport... we want them (kids) to grow up to believe they are unique and that there is greatness in them and we want them to know that football is a tool and an avenue that can take them from one path to another and for them to dream big,” Virtue reasoned.

“We are looking to see what’s happening and how we can expand and grow what we have been doing… as you can imagine we have over 1,200 primary schools in Jamaica and we only did four, but this can be huge,” he concluded.

Speaking about the program, Concacaf Director of Development Jason Roberts said: “The Concacaf NextPlay program is guided by the Confederation’s aim to inspire the love for our game and provide children with access to more opportunities to play football across all 41 Member Associations.

“Through the sport, the Confederation promotes values, leadership and healthy lifestyles. The aim is to deliver an official Football and Education School Program to be implemented in the public school system by engaging in meaningful and sustainable ways with local communities and using football as a tool for education and positive social change.”

Collaborating with Member Associations and Ministries of Sport and Education, affiliated schools with a physical education curriculum can implement the program through a point of contact for specific activities, led preferably by the Technical Director.

Concacaf’s point of contact is the local coordinator who works in tandem with the Technical Director to ensure a successful execution of the program. All local coordinators are participants of the Concacaf Train the Trainer program which aims to develop coaching education instructors within our Member Associations.

Additionally, chosen volunteers complete the Concacaf E License qualification and participate in appropriate capacitation courses hosted by Concacaf, emphasizing the core principles of our brand, football, unity, quality and access. Through this program, we foster the social values of respect, inclusion, teamwork and integrity.

The Concacaf E License course not only prepares the volunteers to conduct age appropriate training sessions for the children, but provides them with a series of practical on field recommendations on how to use the game to teach the social values of the program.