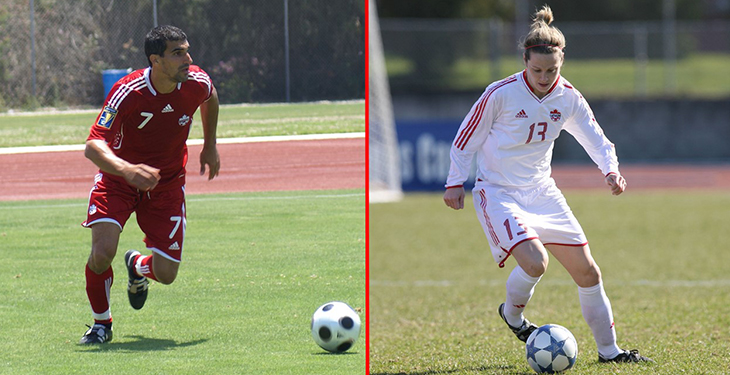 The Canada Soccer Hall of Fame announced Thursday that former national team captains Paul Stalteri and Amy Walsh will be this year’s inductees.

Paul Stalteri (left) and Amy Walsh (right) were named as the newest inductees into the Canada Soccer Hall of Fame. (Photo courtesy of Canada Soccer)

The 84-time capped Stalteri, Canada’s head coach in the 2017 CONCACAF Under-17 Championship, helped Canada win the 2000 CONCACAF Gold Cup. He also competed in the 2001 FIFA Confederations Cup Korea/Japan 2001 and took part in three qualifying cycles for the FIFA World Cup. At the club level, he won both a Bundesliga title and a German Cup (DPF-Pokal) with Werder Breman in 2004, and also played for Tottenham Hotspur, Fulham and Borussia Mönchengladbach.

"I am honoured to be inducted into the Canada Soccer Hall of Fame and would also like to congratulate Amy Walsh as part of the Class of 2017," said Stalteri. "I am grateful to have had a long career playing with the National Team and playing at the club level in Europe."

Walsh earned 102 caps and was a CONCACAF champion, helping Canada win the 1998 CONCACAF Women's Championship in Toronto. She played in two FIFA Women's World Cups (1999, 2007) and one Women's Olympic Football Tournament (2008). At the professional level, she helped Atlanta Beat reach the 2001 WUSA final, only to fall on kicks from the penalty spot

"I am profoundly honoured to be inducted into the Canada Soccer Hall of Fame as part of the Class of 2017 alongside Paul Stalteri," Walsh said. "I am humbled that I will now stand shoulder to shoulder with many of my soccer heroes such as Connie Cant, Geri Donnelly and Andrea Neil."

The Canada Soccer Hall of Fame captures and preserves the history of Canadian soccer, honouring athletes and builders of the game and serving as a library for editorial, promotional, and educational needs.