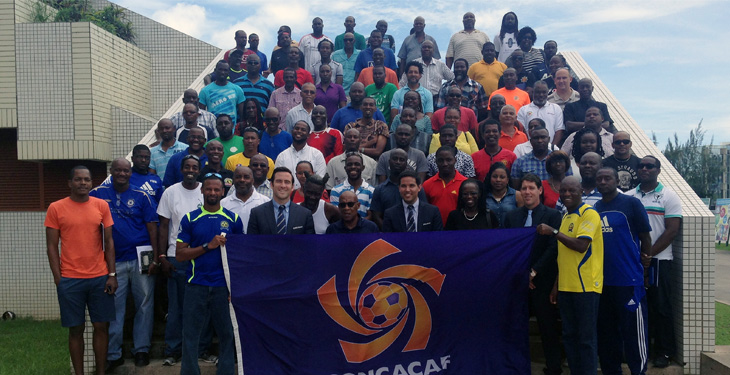 An attractive aspect of the CONCACAF Club Licensing program is its capacity to strengthen leagues/national associations of all sizes, structures and formats.

(ABOVE) Participants to the Club Licensing workshop conducted by CONCACAF and FIFA in Barbados gather for a group photo.

BRIDGETOWN, Barbados – An attractive aspect of the CONCACAF Club Licensing program is its capacity to strengthen leagues/national associations of all sizes, structures and formats.

That feature was fully evident on September 12, when CONCACAF and FIFA conducted a workshop in conjunction with the Barbados Football Association (BFA), informing local men’s and women’s football clubs of the developmental approach to the new Club Licensing system.

The Barbados Domestic Club Licensing system, in its inaugural year, will apply to all Premier League, Women’s League, First, Second and Third Division football clubs. The leagues in Barbados launch annually in January, meaning it is essential that all clubs be licensed by the end of 2015 to ensure their participation.

Compliance with the new system is key as required documentation must be submitted by the November 2, 2015, deadline. This will allow ample time for the BFA’s Club Licensing administration to analyze all presented documentation and, subsequently, take a decision on whether to award or deny licenses through the First Instance Body on November 27, 2015.

In addition to other minimum requirements, clubs will be obliged to complete four online forms, submit a budget for the upcoming season, appoint at least one individual to the roles of General Manager, Finance Officer, Marketing Officer and Media Officer, as well as submit their statutes.

In order to establish and act as the licensor of the new system in Barbados, the BFA has finalized its Club Licensing Regulations and Support Manual and appointed a First Instance Body, an Appeals Body and a Club Licensing manager.

The overall vision of CONCACAF’s Club Licensing system is to improve the quality of all men’s and women’s clubs that participate in sanctioned football, futsal and beach soccer leagues through the implementation of 41 unique Club Licensing systems in partnership with each one of our Member Associations.

If you would like to find out more about the Club Licensing system implemented in Barbados, please click here: