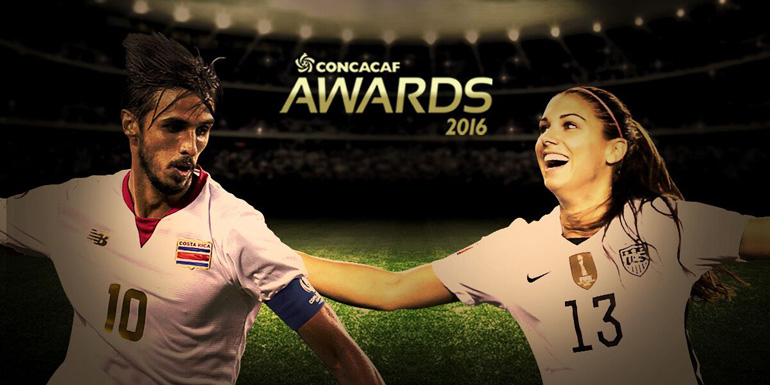 CONCACAF announced today Bryan Ruiz and Alex Morgan, respectively, as the 2016 CONCACAF Male and Female Players of the Year.

MIAMI – CONCACAF announced Wednesday that Bryan Ruiz and Alex Morgan have been named the 2016 CONCACAF Male and Female Players of the Year, respectively. Winners in ten additional categories for the annual CONCACAF Awards were also revealed.

In an equally-weighted vote among Member Association women’s and men’s national team coaches/captains, media and fans, Morgan captured the award for the second time, while this is the first honor for Ruiz.

Ruiz enjoyed a successful 2016 campaign with club and country.  The 31-year-old was key in Sporting Lisbon's run to a runner-up spot in the 2015/16 Portuguese Primeira Liga and a berth in the UEFA Champions League.  He also helped Costa Rica to a first-place finish in Group B in the fourth round of CONCACAF qualifying for the 2018 FIFA World  Cup -- scoring in a 3-0 win over Jamaica -- and played in all three of the Ticos' games in the Copa America Centenario.

Morgan -- recipient of the inaugural CONCACAF award for the region's top female player in 2013 -- finished level with Carli Lloyd as the USA's joint-top scorer in 2016 on 17 goals, including five in the CONCACAF Women's Olympic Qualifying Championship and two in the Women's Olympic Football Tournament.  She also netted four goals in 15 games for the Orlando Pride of the National Women's Soccer League.

Winners in other categories are: Goalkeepers of the Year - Keylor Navas and Ashlyn Harris; Coaches of the Year - Óscar Ramírez and Amelia Valverde; Referees of the Year - César Arturo Ramos and Carol Anne Chenard; Goal of the Year – Jesús Corona, in the 80th minute of the Copa America Centenario match vs. Venezuela.

For the first time, the CONCACAF Outstanding Performance Award was presented by the Confederation to the team or individual that best exemplified excellence through performance, and in so doing helped to further elevate CONCACAF to the highest levels of the sport. This year’s Outstanding Performance Award went to the Canadian Women's National Team and Head Coach John Herdman, medalists at the 2016 Olympic Games in Rio de Janeiro, Brazil.

The Best XI squads were also selected, with Costa Rica and the United States placing a total of six players on the Male and Female teams, respectively.

The CONCACAF Awards are designed to honor the year’s outstanding performers and achievements in confederation-sanctioned competitions involving national teams at all levels and age categories, including FIFA World Cup matches and qualifying for both genders. Performances also eligible for recognition included those achieved in professional club football leagues within the CONCACAF Member Associations, as well as the Scotiabank CONCACAF Champions League.

The votes of three important stake-holding segments within the Confederation were counted in compiling the results. Member Associations’ national team coaches and captains (women’s and men’s), accredited media and fans each accounted for one third of the final vote.

Here’s a closer look at the vote in each of this year's categories: