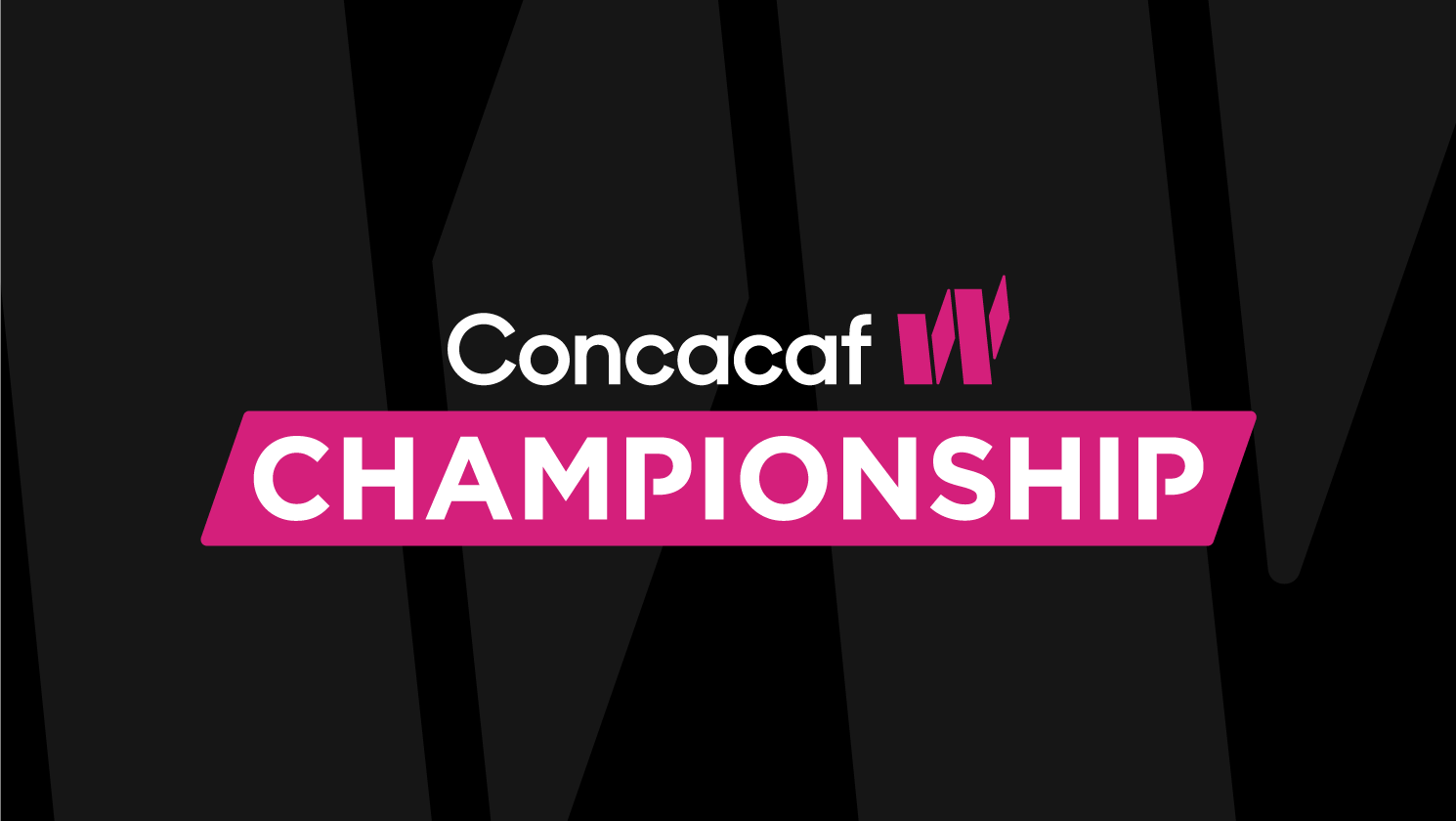 Miami, FL – Concacaf has announced the match schedule for the 2022 Concacaf W Championship (CWC). The summer competition, which will serve as the region’s final round of qualifying for the FIFA Women's World Cup Australia and New Zealand 2023 (FWWC) and as a qualifier to the Paris 2024 Summer Olympics, is scheduled to be played between July 4-18, 2022.

This revamped CWC, a key part of the Confederation's new women's senior national team ecosystem taking place from 2021 through 2024, will be played across two stadiums in Monterrey, Mexico. Estadio BBVA is set to host the Final match on Monday, July 18.

To download the match schedule, click here (also available below and kickoff times will be announced at a later date)

Eight teams are slated to participate in the tournament, including the United States and Canada. The reigning FIFA Women’s World Cup Champions and the 2020 Tokyo Olympics Gold Medal winners qualified by virtue of being the top two ranked teams in Concacaf and will be joined by hosts Mexico, Costa Rica, Jamaica, Panama, Haiti and Trinidad and Tobago. Those six teams secured their tickets to the 2022 CWC thanks to first-place finishes in their respective groups during the 2022 Concacaf W Qualifying (CWQ).

The draw results are as follows (also available here):

As part of the event, Concacaf unveiled the competition's official song, "Lions" by Skip Marley featuring Cedella Marley, and the new trophy that will be awarded to the 2022 CWC winners. To listen to “Lions”, click here. Images of the new trophy are available here.

The 2022 CWC will kick off with group stage play at both Estadio Universitario and Estadio BBVA. After round robin group stage play, the top two teams in each group will move on to the semifinals and in doing so, qualify directly to the 2023 FWWC (four teams). Meanwhile, the third placed teams in each group will qualify for a 2023 FWWC Intercontinental Playoff (two teams).

The semifinals on July 14 at Estadio Universitario, and final and third-place match on July 18 at Estadio BBVA, will be played in a single elimination format, with the Champion qualifying for both the 2024 Paris Olympics and the inaugural Concacaf W Gold Cup (CWGC), to be held in 2024.

The runner-up and third-place teams will also square off in a Concacaf Olympic play-in series, scheduled for September 2023. The winner of that play-in series will also qualify for the 2024 Paris Olympics and the 2024 CWGC.

The current CWC champion is the United States (second consecutive title and eighth overall) after they defeated Canada 2-0 in the 2018 Final, in Frisco, Texas.

Fans will be able to follow and enjoy the competition through the Confederation’s TV partner networks, including CBS | Paramount + (USA), One Soccer (CAN), ESPN | Star+ (Mexico, Caribbean, and Central America), and multiple partners around the world. For other territories, the event will be available on the Official Concacaf App (all subject to territory restrictions).

2022 Concacaf W Championship Schedule
*Kickoff times to be confirmed at a later date and the order of matches is subject to change. 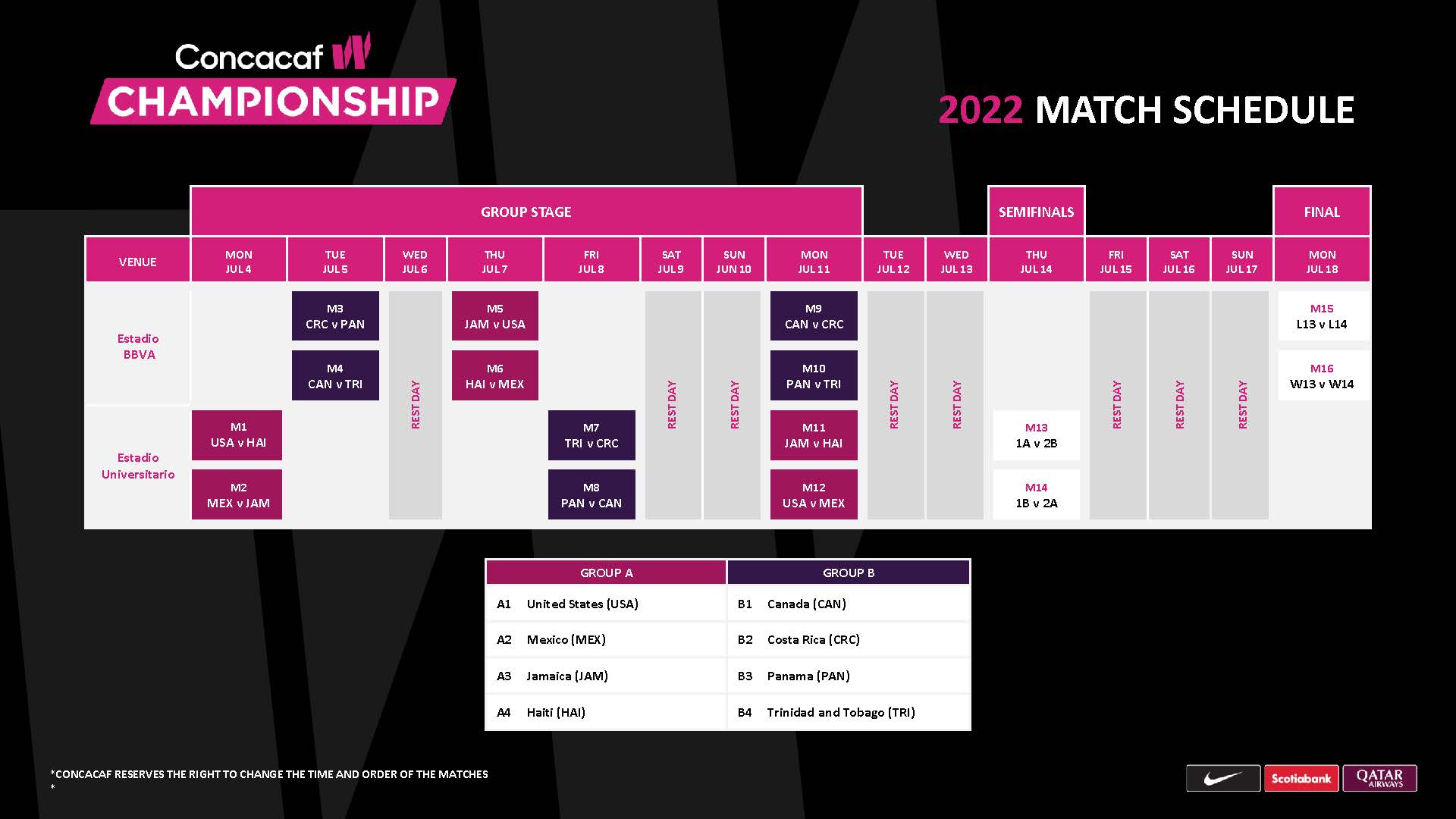