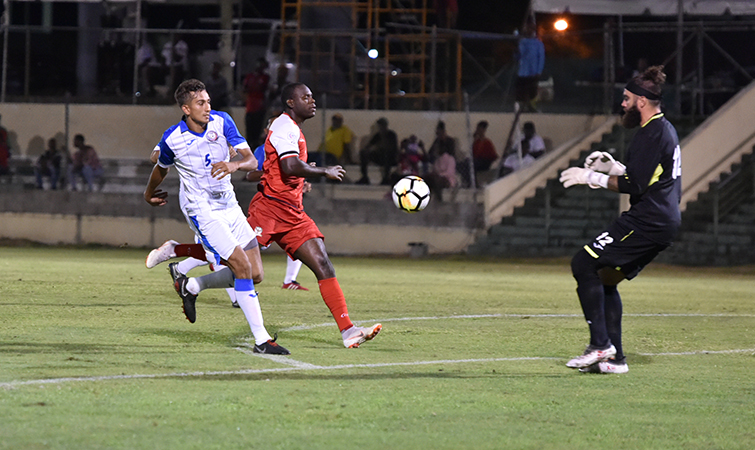 OKLAHOMA CITY, Oklahoma– 2019/20 Concacaf Nations League Qualifying returns next week and no doubt one of the most compelling matches on the docket will be Puerto Rico hosting Martinique on Saturday, October 13.

It will mark the first home match for the Boricuas since last fall’s devastating Hurricane Maria, which is giving the Puerto Rico players an extra push as they begin their preparation.

“Puerto Rico pride is a real thing and we want to put on a show for the people of Puerto Rico, ourselves and our families,” said Puerto Rico GK Cody Laurendi in an exclusive interview with Concacaf.com.

“Playing in our home environment is always special. Leading up to the match it may get emotional, but once it starts you settle in and just take it play by play,” added Laurendi.

Puerto Rico is coming off a heartbreaking 1-0 defeat to Saint Kitts and Nevis in which a second half stoppage time by the Sugar Boyz denied Laurendi & Co. a point. Nevertheless, the 30-year-old twice-capped stopper believes there were positives to take away from the affair.

“Having an opportunity to represent Puerto Rico in such a cool competition was obviously huge. We absorbed pressure so that made it tough to create chances, but I feel like we did our best,” said Laurendi.

The match was also the debut of legendary Honduras international Amado Guevara as Head Coach. From the second he walked in the door, Guevara had the attention and respect of the Puerto Rican squad.

“We could not have asked for a better resume than Amado. He has seen it all and done it all. He’s played in a World Cup, he’s very professional, meticulous and it’s inspiring to us and especially for our young players to have someone of his caliber leading us,” said Laurendi.

Despite the defeat, Laurendi was superb against Saint Kitts and Nevis by making a number of saves that kept his team in the match. For the Oklahoma City Energy FC man, it was the continuation of what has been an excellent season in which he has played in nine matches since signing on July 19.

You can also add Laurendi to the lost of players in Concacaf who have quickly become fans of the CNL.

“I think the CNL is great. People are getting to see talented individuals who otherwise would have been overlooked and so I think it will help some players get looks from bigger clubs in the region and overseas,” concluded Laurendi.