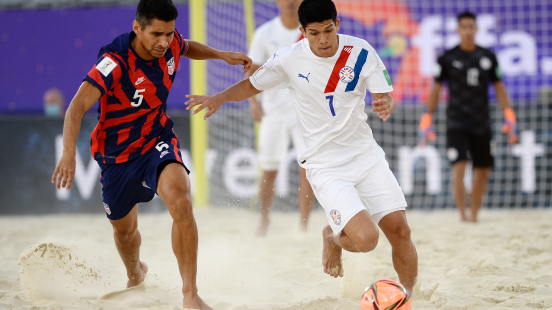 MOSCOW, Russia – The 2021 FIFA Beach Soccer World Cup campaign for the United States came to a close on Monday with a 9-4 defeat to Paraguay at Luzhniki Beach Soccer Stadium in Moscow, Russia.

Goals from Alessandro Canale and Gabe Silveira had the U.S. down just 3-2 early in the second period, but Paraguay would go on a run of scoring four straight goals to put the U.S. in a deep hole.

Nicolas Perea and a second goal from Canale provided some hope in the final period with the U.S. down 8-4, but in the end the spoils belonged to the South Americans.

Canale finishes the tournament as the top scorer for the U.S. with five goals.

Concacaf’s other representative at the 2021 FBSWC, El Salvador, will look to claim all three points to keep their knockout round hopes alive when they take on Switzerland on Tuesday.

Ruben Batres, Heber Ramos and Frank Velasquez each have two goals thus far to lead El Salvador in scoring at the tournament.

It will mark the first ever meeting between El Salvador and Switzerland at a FBSWC.