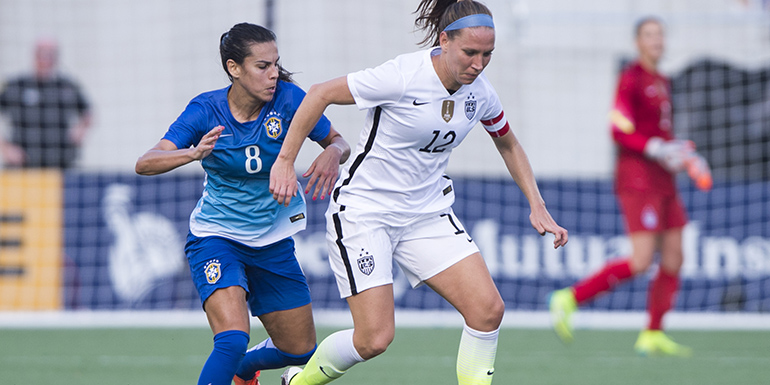 The United States women’s national team extended its home unbeaten streak to 102 games by scoring late in each half for a 3-1 win over Brazil in an international friendly on Sunday.

In her last game for the USA, Lauren Holiday (white jersey) attempts to keep the ball away from a Brazil defender during their international friendly on October 25, 2015, in Orlando, Florida. (Photo: Brad Smith/isiphotos.com)

ORLANDO – The United States women’s national team extended its home unbeaten streak to 102 games (89W-13D-0L) by scoring late in each half for a 3-1 win over Brazil in an international friendly on Sunday.

Long-time standouts defender Lori Chalupny and midfielder Lauren Holiday made their final appearances for the U.S. after accumulating 106 and 133 caps, respectively.  The World Cup and Olympic champions were honored prior to kickoff, before a crowd of 32,869 fans at the Orlando Citrus Bowl.

Although the Brazilians held a 13-8 advantage in shots, the Americans capitalized more frequently on their opportunities and went ahead 1-0 in the ninth minute.  Alex Morgan received a superbly angled pass from Tobin Heath on the left side, ran past the defense, rounded goalkeeper Luicana to slot home from eight yards with her left.  It was Morgan’s 55th career goal.

Brazil leveled in the 45th minute, when Cristiane received a feed Marta in the right side of the box, cut back inside and drilled a left-footed shot from 15-yards out into the left corner.

The U.S. response was swift and it regained the lead in the third minute of stoppage time through Crystal Dunn, the 2015 National Women’s Soccer League MVP.  A left-sided cross by Meghan Klingenberg found Lindsey Horan, whose point-blank header hit off Luciana.  Dunn was there to pound home the rebound with a right-footed shot from the edge of the six-yard box.

Stephanie McCaffrey – on her USWNT debut – completed the scoreline in the fourth minute of second-half stoppage, first-timing Megan Rapinoe cross from the left side at the far post.

The 2015 Women’s World Cup champion, which also tied the Brazilians 1-1 four days ago -- returns to action against Trinidad & Tobago on December 6 in Honolulu, Hawaii.