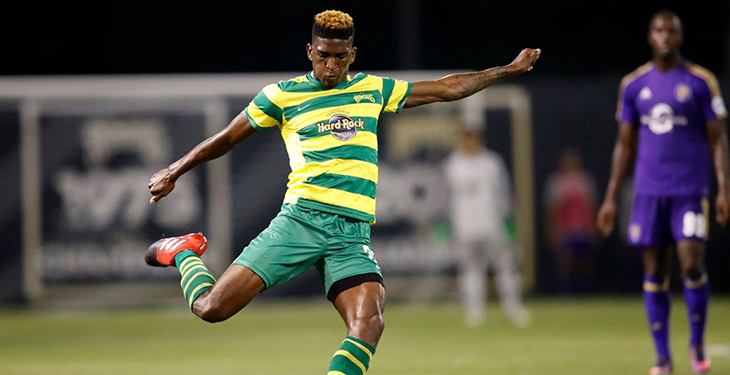 Defender Damion Lowe is a promising talent on the rise for Jamaica.

Defender Damion Lowe is a promising talent on the rise for Jamaica. The son of former Jamaica International Onandi Lowe is looking to follow in his father’s footsteps on the pitch. The 23-year-old, who plays for the USL’s Tampa Bay Rowdies, took some time to speak to CONCACAF.com about his footballing career and ambitions.

Growing up, which footballer did you look up to for inspiration?
My father (Onandi Lowe) was always my motivation, but I also have Luton Shelton, Gregory Messam and Ricardo Gardener as role models.

You started out playing competitively with Camperdown High School. How key was Camperdown in your development as a player?
They played a key factor because we had good players, so training was always competitive. We also had good mentors that kept us in tune, so it was a great environment and program from which to build.

You were five-years-old when Jamaica played in the 1998 FIFA World Cup in France. Do you remember watching your dad on the TV?
I don't remember the games, but I remember the excitement surrounding the event. I remember wearing my polo shirt with a Jamaica flag during that time.

What is your best memory of your dad playing and scoring for Jamaica?
My best memory was in 2003, when Jamaica played against Nigeria in the National Stadium and he scored in a 3-2 victory.

You made your debut for Jamaica in 2016 against Guyana. What was it like to represent your country at the senior level?
It was incredible as I know it was a major achievement and I've made so many people proud. What made it more meaningful was the circumstances and what we had to do in order to win the game. This involved drawing 2-2 at the end of ninety minutes and then going on to win 4-2 in extra time.

What are your goals for 2017?
Getting in the CONCACAF Gold cup squad is a priority for sure, but first I want to settle in with my new club Tampa Bay Rowdies and perform as well as I did during my time in Minnesota. I just have to take care of the on field stuff and everything else will fall in to place.

How thrilled are you to join the Tampa Bay Rowdies?
Rowdies is a good organization that has a great future. They gave me the opportunity to be a part of their organization and I am grateful.

What Advice do you have to youngsters who want to play football professionally?
Have faith, work hard, believe in yourself and always try to turn the negative into a positive.

What do you like to do for fun outside of football?
I like to play FIFA Video Games all day (laugh)!